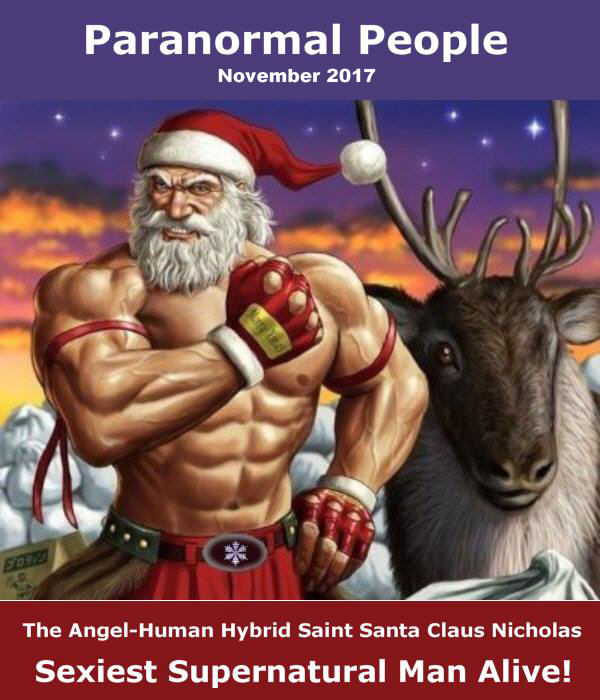 Paranormal People Magazine is the secret supernatural sub-magazine of People Magazine. A mystical magazine only distributed to those of us in the real supernatural community. The magazine tends to take a lighter tone rather than focusing on the dangers of the dark forces that infest our planet. For the second year in a row they have named Santa Claus, aka Saint Nicholas, as the Sexiest Supernatural Man alive on Earth for 2017.  As a Demi-Angel, aka Angel-Human Hybrid, he has been blessed with a handsome exterior complete with a naturally muscular physique. Santa is seen as the savior, and leader of the forces of light on Earth. His headquarters of justice is North Pole City.

When asked for a comment he said,”I’m very flattered by this recognition! However we have much more pressing matters to concentrate on as all out Armageddon approaches! I must also stress I’m happily married to my wife Holly so I implore the lustful ladies out there to respect our sacred union. Let the Spirit Of Christmas dwell in your hearts in place of physical temptations. Merry Christmas to all and thank you!” Mrs. Claus had a similar comment when she said,”He’s all mine ladies! Don’t even think of it! We’ve been happily together longer than any human has been alive! However I forgive you for your less than pure thoughts directed at my husband. Merry Christmas!”

Interestingly enough Santa Claus’s evil identical twin brother, The Anti-Claus, should theoretically enjoy this honor as well. Unfortunately for him his turn to the dark side warped his Angel genes into that of demonic. This altered his appearance to that of less than flattering. This also included him ironically acquiring the iconic bowl full of jelly belly mistakenly attributed to Santa Claus. Despite this the Anti-Claus can utilize dark spells to Glamour his appearance into something handsome. The Dark Claus wasn’t available for comment but he does have a history of deep jealousy toward his holy brother. More than likely he is hiding in a cave somewhere plotting his Christmas revenge!