Supposedly the man in this video is dressed in an impressive accurately large Slender Man mask, and suit. Perhaps it’s really the notoriously evil Slender Man himself? Recent paranormal intelligence indicates that the Slender Man Assassin may have shot Slender Man with some type of chemical weapon that temporarily altered his brain chemistry. This might explain his odd out in public behavior rather than skulking about the wooded shadows or on the outskirts of children’s playgrounds. 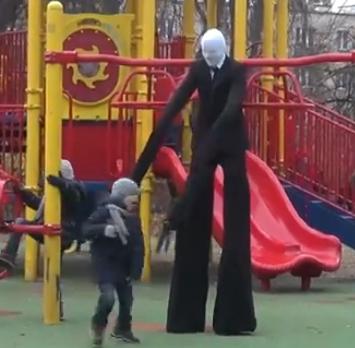 The person filming this is conjectured to be the first sentient being who ran across Slender after his altered mental state occurred. Slender is known for his hypnosis of humans so it could be that the roles are reversed during this video. This human seems to be using Slender Man as a pranking tool, and possibly for personal missions of a sinister nature! If this was the case it’s estimated that Slenderman snapped out of it within a month, or so. Most likely the cameraman is no longer with us or at least suffering with the sinister Slender Sickness!🦑