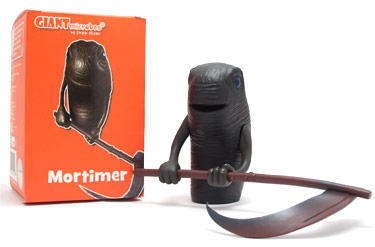 The notorious Black Death that ravaged 14th century Europe was a supernatural biological warfare experiment.  A horror perpetrated by none other than the master of death & disease The Plague Doctor!  Paranormal records now indicate that he named the Black Plague Mortimer as it was his pet project.  Indeed he sees bacteria, and viruses as his friends. Various drawings depict Mortimer as the Black Plague spirit that drove his disease to pandemic levels. A Dark Spirit conjured from the diabolical sub-conscious mind of The Plague Doctor, Two of the Four Horsemen Pestilence & Death along with the fear of deadly disease in the minds of humans everywhere! The above photo is a duplication of the ancient illustrations, and it’s now available as a vinyl figure for historical remembrance, a protective totem for those who believe in the world of the supernatural, or even just Halloween decor.

Evidence indicates such dolls fashioned in the Plague Spirits image were used by those in the paranormal know to repel Mortimer’s reign of bubonic terror!  Seeing his own horrific image caused him to leave the owners of the figure alone.  Mortimer may have also believed their knowledge of the paranormal could lead to his demise.  Rather than risk it he moved on to millions of other victims!  Click here if you would like to own the macabre historical personification of the Black Plague holding the scythe of the most famous, and deadly of the Four Horsemen.  Death himself!