Can The Power Of Christ Compel A Witch To Burn?

Posted on October 12, 2020 by Halloween Haunter

The hilarious cartoon clip above is from the “Family Guy” episode called “The Cleveland-Loretta Quagmire”  It features a scene from an imaginary episode of “Bewitched” where the mortal Darrin finally gets revenge against his Mother-In-Law Witch Endora. This much deserved revenge after her years of magical harassment against him.  There’s no excuse for a powerful witch to harass a human who doesn’t know anything about magic! After enduring the humility of being a sapient elephant Endora returns him to human form.  He then pulls out a bottle of holy water, and tells Endora that “The power of Christ compels” her.  The once invincible witch falls to the floor screaming in agony.  I’m sure Darrin had been planning this for quite some time after researching what a simple human could do to defend himself against a powerful paranormal being. His wife Samantha didn’t seem shocked to see her husband attacking her Mom so she clearly supported his effort to stand up for himself. 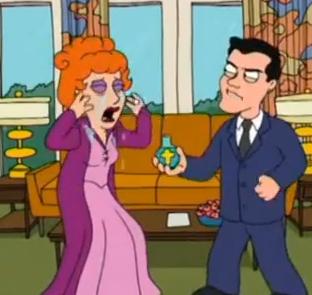 So would this actually work on a witch in real life?  It would work to an extent on a witch, or warlock whose magic comes from the worship of demons.  However, beings with magic surging through them aren’t as easily repelled as say a vampire, or werewolf might be by religious artifacts.  Anyone wielding magic will react to various stimuli differently so it’s not recommended as the sole source of defense against a dark witch.  Your chances would be much better by adding other known witch repellents to the water. Perhaps Derwood, I mean Darrin, did just that. Would this work against a good witch who called upon the so called Pagan Gods for power?  If the person was a powerful priest with deep religious belief, and powerful artifacts then he, or she might be able to muster some minor repellent properties. Things would get interesting if the Priest was directly channeling an Angel or their God. Although, that doesn’t happen too often.

In the “Bewitched“ series the witches, and warlocks were portrayed more as immortal Gods than witches. One would almost think they started out as normal witches in the past. They once worshipped nature gods, and goddesses who then granted them power. Eventually they found a way to siphon all the metaphysical energy and destroy said deities thus becoming gods themselves. Or the gods are locked away used as supernatural batteries who charge up these insanely powerful witches!  Certainly holy water, and some Christian mantras wouldn’t cause such pain in these powerful enchanted entities.  Still it’s nice to see cartoon Darrin finally get some much deserved payback for years of magical torture at the hands of his cruel supernatural mother-in-law!

We love all things Halloween! Whether it's glee of trick o treating, the iridescent allure of the autumn season, or the spooky mystique of supernatural beings. Enter the world of Halloween all year round on our All Hallows Blog.
View all posts by Halloween Haunter →
This entry was posted in Halloween Hilarity, Halloween TV, Witches and tagged Bewitched, Family Guy. Bookmark the permalink.