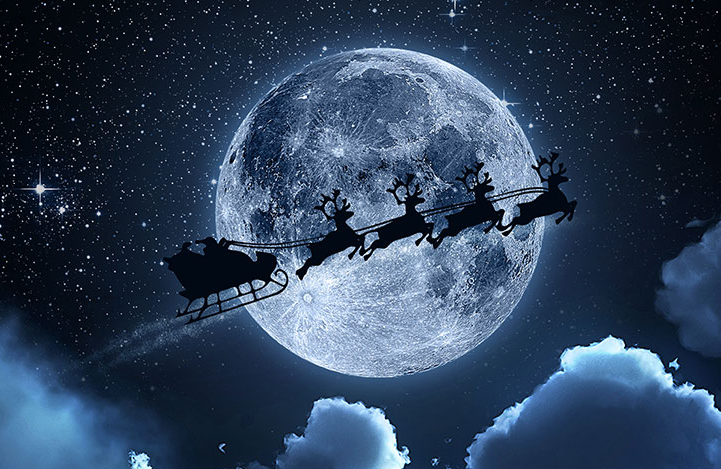 Indeed Santa Claus has flown into space with his reindeer and sleigh. He’s even flown on his own Superman style! Yes as a Angel-Human Hybrid he has the power of levitation and self-telekinetic flight. However he is quite modest about his powers and chooses to live like a human most of the time. Still in the early days of discovering his powers and abilities he flew about the Earth with his curiosity taking him into outer space. In fact he flew all the way to the Moon and back while holding his breath! Later on during the enchanted era of his sleigh and flying reindeer he went back to the Moon multiple times. Santa also flies his sleigh into orbit with Mrs.Claus on Valentines Day.

Father Christmas’s most recent trip to the Moon was in 1987 after persistent rumors that the American Moon landings were faked. Indeed he found the lunar equipment, US flags, and astronaut footprints. He also left his own boot prints along with those of his reindeer.  With his super sleigh and enchanted reindeer Santa has also flown to both Mars and even Venus!  He has walked on the surface of Mars and ultra harsh Venus courtesy of strong Enochian Angel magic protection spells. Santa envisions the day when humans will terraform and colonize both planets. This will require him to extend Christmas delivery to these new worlds. With his powers of precognition he has seen a time thousands of years from now when the Christmas Spirit spans the entire Milky Way Galaxy and beyond!

Santa Claus has also visited other worlds across the Universe via paranormal portals, wondrous wormholes, and magical spells! Sometimes meeting extraterrestrial equivalents of himself who celebrate holidays similar to Christmas!