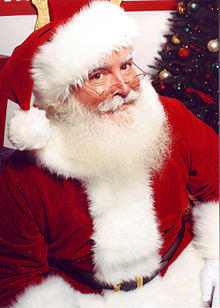 Angels in biological form can actually move at the speed of light!  The closer they are to this speed the more their physical form begins to phase into a pure energy form.  They are limited to this speed due to the laws of physics.  However, they can also create a bubble of five-dimensional hyperspace around them and move at nearly unlimited faster than light speeds allowing for travel back in time.  Santa Claus is a half Angel, or a Demi-Angel, who is also half human.  He has informed us that he can run at approximately 40% the speed of light along with achieving a slightly higher speed through flying without reindeer. He does this via self-telekinesis or levitation.

Santa Claus also has the psychokinetic power of Chronokinesis.  Chronokinesis is the manipulation of time to allow for travel to the past and future along with slowing down or speeding up time.  His personal angelic speed, slowing down time, magical sleigh, and enchanted reindeer allow him to deliver all his gifts in one Christmas night.  Santa’s sleigh moves at the speed of light thanks to magic.  On his own, Santa Claus can move at half the speed of light which is 335,308,314.5 mph.  With magical help courtesy of the Christmas Spirit, Father Christmas can move at the speed of light or 670,616,629 mph. He has also experimented with 5-D hyperspace bubbles but utilization of them on Earth while on the move can be disruptive.

Needless to say, if you’ve been naughty there’s no point in running away from Santa because he’ll catch you every time!  Even if you hide he’ll just travel back in time to a point where he knows you’ll be.   For those who are nice good luck on catching him in the act of eating your milk, and cookies on Christmas Eve! Perhaps you’ll be fortunate enough to catch a glimpse of a red blur whizzing through your home!