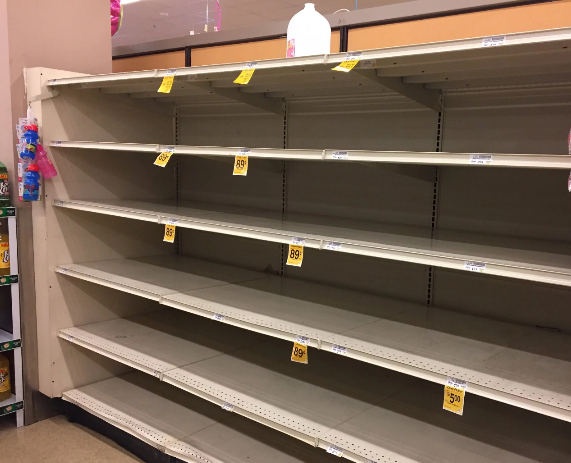 As the Coronavirus Pandemic rages on a new breed of titanic turd has emerged! Those who travel to several stores in trucks and buy up hand sanitizer, toilet paper, surgical masks, and all manner of non-perishable goods amid the insane panic shopping taking place. Some selfishly keep it for themselves under some misguided belief that that apocalypse is at hand. For reasons not fully understood toilet paper is the big thing to buy up. Plausibly they have a rare form of Corona Diarrhea. Others look to sell their bounty of products at over-inflated prices to take advantage of people. In the mix, these bastards are screwing over the low income, elderly, and those on the front line fighting this perplexing pandemic! A pandemic we know that was perpetrated by The Plague Doctor! His chaotic cult stole a vexing virus from a Chinese bio-warfare lab and then altered it with unique paranormal properties. This included precursors to the zombie virus that can cause Zombie Flu and in rare cases the actual full blown Zombie Virus itself. These facts have been kept from the general public by the US Paranormal Defense Agency and the equivalent organizations of other nations!

We here at Mystic Investigations are disgusted by these sons of bitches bull crap! Especially when we can’t buy what we need at local stores due to the shelves being empty as if this is the Soviet Union! Thankfully, our paranormal investigations organization is made up of immortal supernatural beings who may operate above the law for the sake of justice! Last night we raided the biggest bastards in our tri-county area and took most of their selfish stockpiles while leaving some with a reasonable amount. We then distributed them to local charities, nursing homes, community centers, medical centers, and those we know who are in real need of various items. Just like Santa Claus delivering his Christmas gifts we completed our mission as the sun rose. Below are a few tales of the profiteers and hoarders who didn’t take kindly to us entering their heinous homes and taking their ill-gotten gains!

A Vampire Takes Down A Gang Of Hand Sanitizer Hoarding Punks!

Our Executive Vice-President Vampire Drake Alexander discovered a gang of drug and gun dealers who decided to get into the pandemic profit game and form a Corona Cabal. He kicked in the front door of their house at 1:00 AM with fangs extended and eyes glowing red with anger. His guttural vampire growls were greeted with machine gun fire that ruined Drakes’s finely tailored business suit. However, they bounced off his skin bringing him only mild irritation. Drake then demanded, “Where’s the damn hand sanitizer? I want it now you pandemic pukes!” He began launching them through walls and up through the ceiling! This went on as he bent the hot steel of blazing gun barrels! After beating the crap out of them Drake destroyed all their guns and flushed their drugs down the crapper. He then began loading up the goods he came for including the hallowed hand sanitizer. After his rented truck was full Drake came back inside the house and said, “You’re done in this town! I better not find you here tomorrow night or else…”

A Demi-Mermaid Witch Jacks Up A Pandemic Profiteering Fraternity!

It was Midnight when our Senior Vice-President Demi-Mermaid Witch Rebecca Abernathy blasted through the window of a frat house near a college campus. The Generation Z boys ran downstairs to find Rebecca trashing the place amid shards of glass scattered everywhere. One of the guys said, “Hey bitch what the hell? We’re calling the cops!” The slender 5′ 9″ Rebecca grabbed the 6′ 2″ man and lifted him up by his collar while screaming, “Where’s the damn toilet paper you piece of crap?” Another guy said, “Hey screw you, lady! We’re selling it for $20 a pack on eBay!” She thew the guy she was holding against a wall causing drywall to fly everywhere as she beat the ever-loving hell out of the selfish frat boys. They were too pathetic to waste her marvelous magic on. Mermaid brute strength, speed, and agility were enough!  Rebecca dragged a rather muscular 6′ 5″ football player into the bathroom and repeatedly dunked his face in the crapper while yelling, “Where’s the freaking poop paper you little sh*t!” He finally gurgled, “It’s in the basement…Jesus Christ what the f**k!” She tossed him in the tub and went down to the basement to collect her prize. Mountains of glorious gleaming white toilet paper! She loaded it on a truck at super speed and raced away just as the flashing lights and sirens of the police pulled up. Rebecca laughed so loudly like a loon that it echoed miles away!

The Mystic Investigations Team Sticks It To The Hellish Hoarders!

The rest of our team members had similar experiences and met little resistance in comparison to our combat skills! Those without powers borrowed magic from Rebecca or utilized their mastery of martial arts to take back the essential supplies that belong to the general public. There were a few close calls with local law enforcement but our friend Sheriff Blake Maverick ran interference when necessary as he had full knowledge of our carefully crafted caper in the name of justice. Mystic Investigations will continue to rob the hoarders and give to the poor, elderly, disease-stricken, and medical personnel until this panic buying, hoarding, and price gouging profiting finally ends! May God have mercy on the selfish souls who stand in the way of our special brand of justice!