I’m the fifth generation vampire Drake Alexander, and over 140 years later I still regret my first, and only encounter with a Wendigo.  It was December 1865, and I was going to head out west after the blood fest of the Civil War.  I stopped in Wisconsin, and ended up saving a Chippewa Indian tribe from an anti-Native American torch wielding mob. I single handedly beat the hell out of a good portion of the crazed paranoid pack along with scaring the rest with my glowing eyes, fangs, and supernatural abilities.  One of the Chippewa saw what I was, and screamed to the crowd that I was a demonic spirit who would haunt them for all eternity if they ever came back.  Oddly enough they never did return to the peaceful village of Native Americans.

The Chippewa called me their great white spirit protector, and invited me to stay with them.  I had several wonderful weeks with them as the cold hard winter pushed forth into January of 1866.  I went out hunting with them, and manged to keep them fed even with the sparse wildlife afoot. It was no problem for me to catch a deer everyday with my bare hands in order to feed the village, and have skins for clothing.  I even started dressing like them, and their peaceful down to Earth way of life brought peace to me after witnessing the blood soaked battlefields of the Civil War.  As a vampire I appreciated the never ending supply of blood but not at the cost of so much human life.  My days of killing over blood ended centuries ago, and having that death happen by proxy still brought guilt to me.

One night I was admiring the stars when screams of terror rang forth within the normally dormant nocturnal hours.  I thought it was a Werewolf but it was too skinny.  I could clearly make out it’s ribs.  Werewolves are far muscular, and of a heavy build.  The disgusting beasts face was even more hideous than the quintessential Werewolf, and it spent most of it’s time on two legs rather than all fours like a Werewolf does most of the time. There was also an intelligence in it’s eyes that you don’t see in the standard mindlessly rabid Werewolf.  I heard people scream “Wendigo” in their native Algonquian tongue which I have grown rather proficient in very quickly. At the time I had no clue what a Wendigo was. I just assumed it was an odd kind of Werewolf I never saw before. Perhaps the product of magic.  I soon realized he was dealing with a sinister sentient being rather than a mindless rage filled Werewolf. The Wendigo spotted me from yards away, and was upon me in an instant.  He caught me off guard, and bit a huge chunk out of my arm.  As the blood began to spurt about he quickly spat it out as I hit him with my other arm sending the growing beast crashing through two wigwams. The Wendigo quickly recovered, and sped toward me so fast that I was knocked to the ground hard. He then launched on top of me, and started digging his razor sharp claws into my chest. Clearly his intent was my heart. I got the sense he knew what I was, and that the heart was the way to finish me off.  I managed to snap the bloody bastards arm, and managed to reversed positions as the Wendigo howled madly. I then sunk my teeth into the hellish beast with the intent of draining his blood as I had no way of knowing if this thing could die by normal means. The black oily blood was so vile tasting that I got distracted, and the Wendigo tossed me through a tree causing it to crash to the ground. Splinters, and all I  sprung up quickly, picked up the tree trunk, and used it as a baseball bat which sent the furry monster flying into a pond nearby. He crashed through the ice, and I raced in after him.  From there a battle ensued for several minutes with water, and ice shot about the surrounding forest.  Both of us were full of each other blood as I finally thew him into the shore so hard that he got stuck in the dirt.

I darted toward him, and plunged my hand through the rib cage right into the Wendigo’s chest..  I pulled out his sickly looking little black heart, and crushed it in my hands  The light in the Wendigo’s eyes extinguished as the his monstrous mayhem came to close.  The Chippewa quickly ran toward me congratulating me for my supposed heroics.  They then threw the Wendigo corpse on a bonfire to insure it was truly gone for good.  However I was informed that the evil ones spirit would live on, and possible infest a starving human.  A human that would turn cannibalistic, and begin the transition into a new Wendigo.  Winter is the time of scarce food supplies, and it’s when the Wendigo spirit takes advantage of people.  I planned to spend the rest of the winter insuring that everyone was well fed.

Unfortunately the Wendigo blood was deeply poisonous to vampires, and I began suffering insane hallucinations, and violent thoughts. I began suffering from the vampire variety of Wendigo psychosis which targeted my supernatural blood lust.  All I could see was red everywhere, and became nothing more than a demonic animal.  For one hour I went on an uncontrollable horrific killing spree.  An hour I regretted the rest of my life. I may have saved the tribe from the Wendigo but the Wendigo’s blood turned me into a killing machine  It cut off all logical reasoning, and my demonic vampire DNA took over. When I snapped out of the blood poisoning I found most of the tribe massacred. I lied among the ruins of wigwams, and bloodied bodies crying profusely. Despite the fact that I should have felt super charged from all the blood I was instead sick to my stomach about what I’d done. I had decided to throw myself upon the very flames that engulfed the Wendigo when the family I was staying with stopped me.  They had immediately fled high up a tree some yards away, and watched the whole horrid slaying.  The small amount of the tribe left walked toward me cautiously.  They blamed the Wendigo spirit, and not me.

I am beyond remorseful over the deaths of all those innocent Native Americans who were my friends, and extended family. They reassured me it wasn’t my fault, and we all buried the corpses together while partaking of a sacred burial ritual to prevent any zombies from forming.  For a week I went though a personal cleansing ritual to try, and ease my mind at the atrocity I had committed. I was forgive by all, and told that the spirits of the dead held no malice against me, and no personal haunting would occur.  None ever did but I wouldn’t blame any ghost if they had wanted to torment me for all eternity. I still feel great guilt to this day, and despite my shame I feel I must tell people every so often to help with the 100+ grieving process.  I do keep in touch with the descendents of the tribe.  A handful of elders know I’m a vampire although they still call me the great white spirit protector.  In fact before moving on to the wild west in the spring of 1866 I turned one of the Indians into a vampire because he wanted to protect his people forever.  He still walks among us to this very day.

On a final note, at Xavier’s request, for those of you wondering. I found the Wendigo more difficult to battle than the average Werewolf despite it’s skinnier less muscular frame.  Clearly the Wendigo has a great deal of paranormal power packed into it’s pathetic frame which isn’t surprising since I appear to be a 6′ 2″ man of medium-heavy build who can take 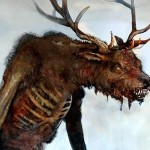 down all manner of ferocious creatures that would appear to stronger than I.  In the world of the paranormal size, and appearance don’t mean anything.  It’s the source of your supernatural DNA, and the magical energies that may swim within your blood.  In addition the Wendigo clearly was a focused, yet rage filled, fighter while Werewolves clearly are just full of unfocused rage.  I estimate that the average Werewolf would put up a great fight but would eventually loose to a Wendigo.  I also think that seventh generation vampires or below would loose as well.  Keep in mind the Wendigo I fought was close to it’s prime.  It hadn’t entered the stage where it grows deer like antlers, and begins to rot like a zombie.

One Reply to “Vampire Versus Wendigo”