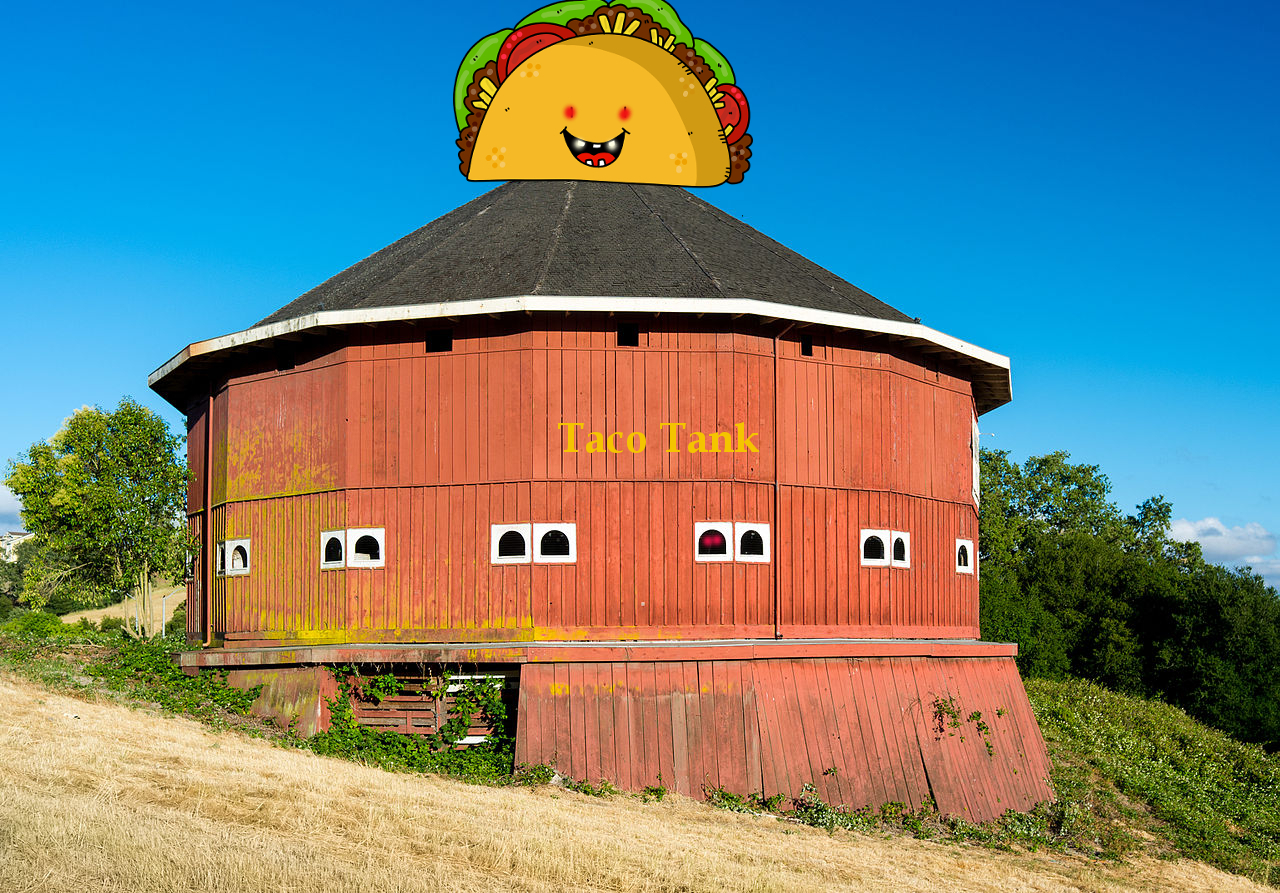 Hey Xavier Remington, President Of Mystic Investigations, here! On #NationalTacoDay some of the Mystic Investigations team was traveling through rural areas of Tennessee in our Mystic RV. A mobile paranormal research combat unit. We were handling various cases of things that go bump in the night around the state. Since it was National Taco Day we were looking for a Taco Bell or some other place to relish in the meat and tortilla goodness. We finally lucked out, or so we thought when we happened upon an old round barn with a spooky titanic Taco emoji with glowing eyes on top. It was 3 PM when we found the Taco Tank. We entered through the large creaking doors into the dimly lit barn that had a concrete floor. We were hesitant at first but the smell of scrumptious tacos hung heavy in the air. We walked past the empty wood tables and up to an old dusty metal counter. We started reading the hand written menu hanging above when all the sudden a creepy guy bolted from the darkness practically screaming, “May I take your order!” He seriously jump scared us! The creeper sort of looked like a deeply demented Vincent Price with a off-putting voice to match.

Our Demi-Mermaid Witch Rebecca Abernathy had a bad feeling about this place. Despite that our hunger overrode any misgivings we had about this drab establishment. The creeper served us our tacos at a table and said, “Oh enjoy your marvelous meal!” He then laughed like a maniacal fool. We were about take to a bite when our resident vampire Drake Alexander burst in from the holy sunlight with smoke rising from his body. He yelled, “Don’t eat the food! It’s made out of people!” I already had a mouth full and spat it out! Drake’s super senses were alerted all the way from the Mystic RV where he was shielded from the sun via unholy glass. The creeper’s eyes glowed red as his fangs extended! He was a vampire and he wasn’t alone! A gang of six vampires emerged from the darkness while the creeper explained,”We only want your blood. The rest of your carcasses goes into the tacos!” The team sprang into action as we faced a nest of vampires dying to kill us!

Drake took on the creeper as he was the most powerful. Rebecca grabbed a female vamp and tossed her right out the barn doors with her mermaid super strength! The vamp started smoking in the sun as Rebecca used her magic to close the doors and seal them. The vamp was stuck outside and burst into flames! I staked one into the heart causing it to flame out and turn to ash. Drake decapitated the creeper and then quickly dispatched another vampire. Former Navy Seal and experienced vampire slayer Hunter Jackson took out the last blood sucker with extreme prejudice! Afterward, we found four people held captive in a sound proof cellar and freed them before burning the den of horrors to the ground! Records inside indicated it had been serving human tacos for the past 30 years! No doubt the place was responsible for countless missing tourists and local hillbillies! Thankfully, we found a Taco Bell in Memphis, TN and enjoyed our dinner on the RV as we headed into Arkansas on the way home to Woodland Springs, Colorado!