Are There Any Zombies At North Pole City? 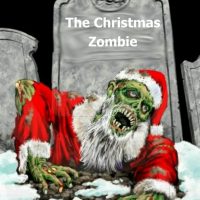 A previous article stated that Santa Claus’s North Pole City was the safest supernatural place to be during the dreaded Zombie Apocalypse. However would you believe North Pole City has had one zombie resident for the past 104 years? It seems a brave Zombie Hunter named Zachariah Lambert was a friend of Santa. He was invited to the North Pole as a reward for his bravery in protecting humankind from the Walking Dead scourge. Unfortunately Zachariah had no idea he had been bitten on his arm that was numb from carrying a heavy sword about a zombie infested forest for days. By the time he walked through the glittering ice gates of North Pole City he was transformed into a zombie!

The Zombie was repelled by the immense holy light of the Christmas Star. A light that comes directly from Heaven. This despite the fact that Zombies are generally not affected by holy artifacts since they have no demonic DNA. The Zombie staggered through an Evergreen Forest, and was spotted by an Elf savoring a candy cane. The enchanted Elf bellowed out in terror,”Eeeeeeeeeeeeeeee”, and scurried through the snow for help as the zombie followed the poor little guy. The Elf warned some kids playing in the woods, and they all ran toward Santa’s house. They came across the Reindeer Blitzen out for a nature hike, and suddenly he was trotting with the pack of perplexed people! Unfortunately it had been a while since he drank the magical potion that gave him the power of flight!

They came upon Santa chopping firewood in front of his house. They all screamed for help! Only the Elf knew to call the living dead creature a Zombie. Santa looked toward the treeline of the forest, and sure enough there was a zombie staggering toward them like a drunk.  Santa approached the walking corpse with axe in hand ready to do what needed to be done. Indeed he had battled many a zombie over the course of his 1000+ year life! To his shock he quickly identified the gray skinned man as his special guest, and hesitated to eradicate the zombie. He knew the brave soul was now in heaven, and that the body was nothing but a mindless cannibalistic corpse. Santa kept pushing the zombie away with his super Demi-Angel strength. He just couldn’t bring himself to do it!

Santa finally grasped the zombie firmly, and compelled the Spirit Of Christmas to bring peace to the walking dead’s mind. The Zombie stopped growling, and chomping while standing still. Santa stored him in a closet in his workshop to consider what to do next. He devised a clever magical spell to halt the zombies decay process, and blessed the beast holy. Santa then worked with various nature deities to make the zombie immune to extreme long term cold. They worked to keep the zombie virus in a state of dormancy. A process that must be constantly maintained. Instead of the vexing virus, and its hunger for human flesh fueling the zombie, the Spirit Of Christmas would infuse energy into it. The zombie then began to only yearn for candy, and all things sweet.

To this day Zack The Christmas Zombie roams about North Pole City on the prowl for candy. Generally, an Elf keeps him supplied with sweets off in the woods but every so often he roams into North Pole Village. Naturally he goes after people holding treats. It’s a fun scare for people, and the children scream with glee as he chases them about. Zack is certainly a fan favorite during Halloween! Santa Claus has spoken with Zachariah Lambert’s spirit in Heaven for approval in using his body in this way. Zack thinks it’s hilarious! He believes it’s a safe learning tool for kids, and those not familiar with the zombie threat. Despite this seeming quite shockingly macabre it’s one of those things you have to experience in person before you judge. Merry Christmas to the most harmless zombie on Earth!

🎅As the Founder and President of Mystic Investigations I have dealt with all manner of metaphysical mayhem! However the supernatural beings and paranormal phenomenon of the Christmas season are some of the most magical. Our supernatural crime fighting team has had the honor of being welcome at the Demi-Angel Santa Claus's North Pole City and the horror of battling the diabolical Anti-Claus! This Xmas blog was born out of a deep interest and love for The Spirit Of Christmas! Merry Christmas To All And To All A Safe Night!🎄
View all posts by Xavier Remington →
This entry was posted in North Pole, Santa Claus, Zombies and tagged North Pole City. Bookmark the permalink.
Copy Protected by Chetan's WP-Copyprotect.