A blessed boy finds an ultra-rare and beyond lucky six-leaf clover in his backyard. He and his family live in North Carolina amid their already unusual yard teeming with four-leaf clovers. They have no idea how such rare clovers have flourished only on their property. After a thorough paranormal investigation, we now know these are grounds of fantastic fortune! Something rarely seen outside of Ireland. The home nation of Leprechauns and their bastion of good luck. It seems some years ago on Saint Patrick’s Day a Leprechaun fought in an epic battle with a Clurichaun, aka Dark Leprechaun of bad luck, over his lucky pot of gold. The area with all the four-leaf clovers was the cloaked end of the rainbow where the Leprechaun stored lucky coins. In fact, a five-leaf clover should be there as well but it probably hasn’t been seen yet. The battle most likely happened during or after The Witching Hour as everyone was fast asleep. The Leprechaun would have taken careful measures to mask the fights sights and sounds via magic so as not to violate The Supernatural Secrecy Pact.

The Battle Between Good Luck And Evil Luck! 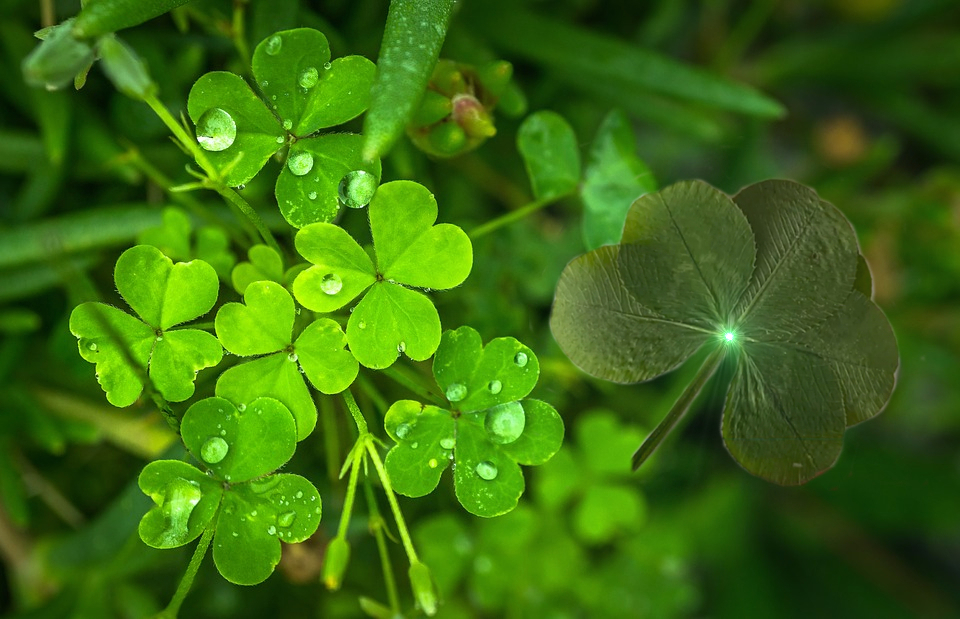 Ultimately, the Leprechaun was the victor in his destruction of the evil Clurichaun. The body would explode into green glitter that made the ground extra holy and lucky. The act of eradicating a being of bad luck by the hand of the Leprechaun creates good luck. This in addition to the luck of a Leprechaun scurrying about the same spot along with his pot of gold resting there. The glorious glitter infused the soil with the enchanted essence of the emerald isle thus causing clover to spring forth. The luckiest of the four-leaf variety. Eventually, a six-leaf emerged which always happens on sainted soils where an evil Leprechaun met his maker. The four-leaf clovers already have immense good fortune but the six-leaf can literally make dreams come true if used properly in the hands of an experienced magician or other well-versed member of the supernatural world. A seven-leaf clover can grant wishes on its own but is only found within the Leprechaun Capital of Lucky Lake in Ireland. These are found on wells of natural good luck or where a fallen Leprechaun has been buried. No matter what this family has a bright future of lovely luck!🍀