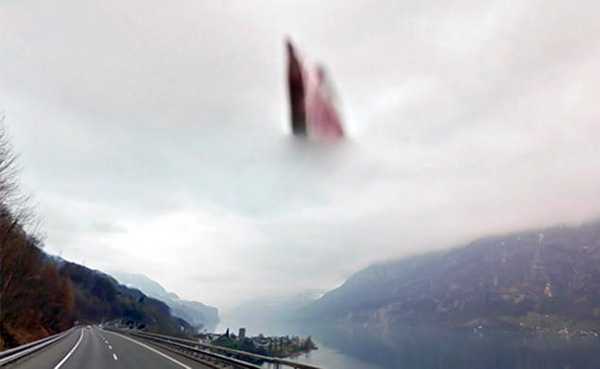 WorldNetDaily (WND.com) has just reported on the images of Jesus Christ, and his mother the Virgin Mary appearing above a highway in the skies of Switzerland.  For those who may not know Jesus Christ is the first son of the Omniverse God with the official title Vice-God Of The Omniverse.   His Earthly Mother is Mary who later attained Sainthood status due to her pivotal role in his Demigod existence as a biological being on Earth some 2000 years ago. The image of the holiest mother and son was found on Google Street View.  Although no witnesses have stepped forward to confirm the image. Our professional Psychic Julia Hathaway, and White Witch Rebecca Abernathy both feel the photo is authentic.

The reason for nobody seeing this with their own eyes could be explained by why many ghosts are seen only by cameras.  They simply phased into the visible light spectrum for one brief blink of the eye, or perhaps several, so only a camera could pick up their image.  It could be that Jesus and Mary were strolling about the Heavenly clouds to survey the Earth for the coming battle of Armageddon.  They may also be attracted to the biggest supernatural event of 2013.  The prophesied resurrection of the Devil, and the birth of the Anti-Christ on Halloween.  It is known that the Omniverse God advocates a non-interference policy when it comes to humankind.  So don’t expect him, Jesus or any official Angels of Heaven to intervene until the official second coming of Jesus Christ.  Although they do actively keep demons jailed in Hell human practitioners of magic can try freeing them into this reality.  Thankfully that process is quite difficult, and takes a great deal of magical power!