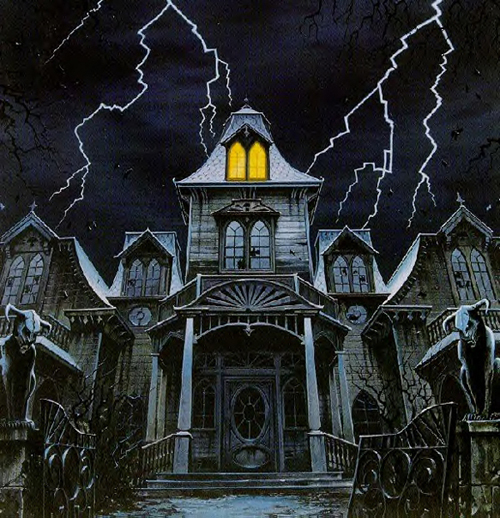 A Halloween haunted house was host to some real horrors on Halloween night 2011.  The house is an attraction of the popular horror-themed amusement park known as Horror Haven Theme Park.  The house of hellish horrors has been critically acclaimed as being quite authentic.  Almost to the point that people swear there are real ghosts, and other paranormal activity going on within its blood stained walls.  However, park officials guarantee it’s just clever props, holographic projectors, various other special effects, and actors in expensive costumes.  Each year there are always a few heart attacks, and some trips, and falls within the dimly lit foggy halls, but this year a horrifying incident took place.  Something so terrifying that the attraction was closed down while police swat were called to the scene as shots bellowed forth into the dark cold night.

22-year-old Dan Flunker was preparing to get into his deranged chain saw-wielding serial killer costume when he was bludgeoned from behind.  He’s currently in the hospital in stable condition.  The attacker then proceeded to stuff his body in a locker, and put on Dan’s costume.  Police later identified this man as 34-year-old Pat Raedemaeker, a traveling water salesman from Edison, NJ with a wife, and two kids.  Pat somehow knew exactly where to go in the dark corridors of the haunted manor, and he took Dan’s standard position in which to scare paid patrons.  Within 30 minutes of the attraction’s opening, the house was crowded to capacity.  The chain saw-wielding serial killer character is supposed to stay behind a wire mesh gate so there’s no chance of the running chain saw coming in contact with any guests of the haunted house.  However Pat leaped out of the cage with the chain saw roaring full-on, and he began brutally attacking random people.  The screams of horror could be heard throughout the house, and out into the crowd outside.  A few unidentified good Samaritans attempted to subdue Pat but they were ripped to shreds by the chain saw.  The macabre massacre continued for 15 minutes until the police swat team arrived, and entered the house whose lights were fully illuminated by park officials.

Police made their way through the bloody carnage that included 14 dead, and 23 wounded.  Eventually, they cornered Mr.Raedemaeker in a mock morgue full of latex corpses.  He lunged at police with his rattling chain saw, and they opened fire on him.  He was killed instantly, and his family was notified.  When we spoke with his wife she was shocked to learn that Pat was not only responsible for the haunted house massacre, but probably also responsible for a string of murders across the United States that coincided with his sales trips.  She apologized to the families of the victims at a news conference, as a candlelight vigil was held outside the haunted house on November 2nd, 2011.  The attraction finally re-opened on December 7th, 2011, and has been doing triple the business it would be doing so close to the Christmas season when most people aren’t interested in horror.  Unfortunately, it seems many have a fascination with the macabre, and many are reporting genuine hauntings at the manufactured haunted house.  Even employees have secretly reported that demonic specters of hell have appeared without any projectors along with unholy stenches, screams of terror from thin air, and objects flying about without invisible wires.  Four paranormal investigations firms, including Mystic Investigations, have concluded that indeed the haunted house is now seriously haunted by the angry victims of the slain, and another evil force as well.

Despite the justice of Mr.Raedemaeker’s death, the spirits of the slaughtered are being held in the house.  Most likely against their will.  Various psychics, including our very own Julia Hathaway, have indicated that Pat ascended to the level of Poltergeist with the help of Demonic forces.  Now the house is a literal hell on Earth.  We and others are working to take down this powerful poltergeist and free the dead so they may cross over to the afterlife, and rest in peace.  For now, we can only pray for their immortal souls.  Despite our recommendation to close down the house for good, park officials can only see dollar signs as crowds pour into the now truly authentic haunted manor.  May God have mercy on all the innocent souls that pass into the hellish halls of horror!

One Reply to “Frightening Accident At St. Louis Haunted House”