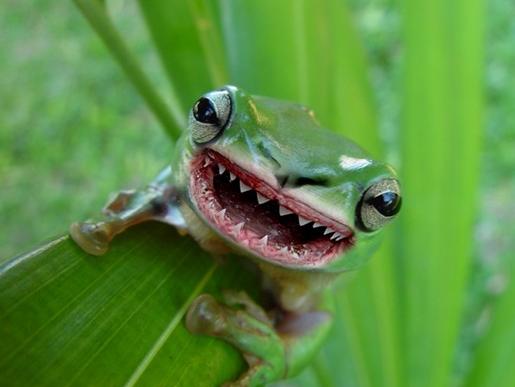 The ferocious meat-eating frogs reported in the media in 2007 as African Clawed Frogs were not the real species that terrorized the good folks in San Francisco’s Golden Gate Park. Although they were right about the frogs being released from a top-secret research facility that is a private government contractor. These nefarious scientists were splicing the DNA of supernatural beings with African Clawed Frogs to create a new deadly paranormal species. These killer carnivorous frogs have been known to attack large animals, including humans, in swarms of 100 or more. They latch on to bodies with their razor-sharp shark-like teeth totally engulfing a person. From that point, they chomp away until nothing is left but bone. Our estimates indicate they can devour an average size adult male in thirty minutes or less.  Our insider sources tell us that the US Paranormal Defense Agency (PDA) used disinformation, and their influence in the mainstream media to keep this paranormal incident secret.

This supernatural amphibian genie has been let out of the bottle, and there’s no going back. Despite the clean-up efforts of the US Paranormal Defense Agency, the frogs still exist in the Golden Gate Park area. However, their numbers are far smaller and more manageable by secret supernatural authorities. These frightening frogs have also been spotted across North, Central, and South America. Attacks on humans and pets are actively suppressed to prevent public panic. If you spot any frog beware! Don’t assume it’s the standard harmless variety. Even one frog isn’t worth the risk when you have no clue what its intent is. Please run in the other direction as fast as your feet can carry you because it could mean the difference between life, and death!  Don’t become a mindless fatality of the Killer Frogs!