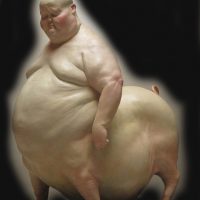 The Boarhog Moothy-San is a legendary monster that lives in the horrified hearts of the Japanese people. You can read our full article on this disturbing creature here. Its spirit has been known to haunt the Aokigahara Forest in Japan. There it possesses animals, and people wreaking hellish havoc. If that wasn’t bad enough, every 100 years it is let loose in its human-hog hybrid form to terrorize locals! This monstrous mayhem has been going on for over 1000 years. Finally we have good news for Japan on this glorious day courtesy of brave supernatural warriors!

On May 31, 2017 private paranormal investigators captured, and contained the Boarhog Moothy-San! They now have possession of her bloated body for supernatural study! A joint expedition of Japanese, Indian, and British paranormal agents had been researching the Moothy-San Monster for four years before tips from local psychics sent them into action! They hiked deep into suspect caves near Mount Fuji, and yielded an amazing discovery. After a tip from local psychics the team unearthed the Moothy-San trapped within a collapsed cavern.

The great beast suddenly awoke as the team’s lights flashed upon its alabaster piggish form. A spine tingling squealing scream shot at them like a

sonic shockwave and the mad monster charged forth with angry hunger in its evil eyes cast upon its goofy looking moon face! The supernatural investigators shot back with high powered stun guns and cattle prods in an effort to preserve the abomination for supernatural science. The blasphemous beast was put down with only one injury to a courageous team member. The gluttons grotesque gargantuan whale rear beared down on a man causing broken bones and major bruising. The alarming abomination was dragged into a cage and lifted from the Aokigahara Forest by freight helicopter. The despicable denizen of darkness now lies in a private secret underground research lab in Tokyo! Thank the Lord this long curse ridden reign of heinous hog terror is over!🐷