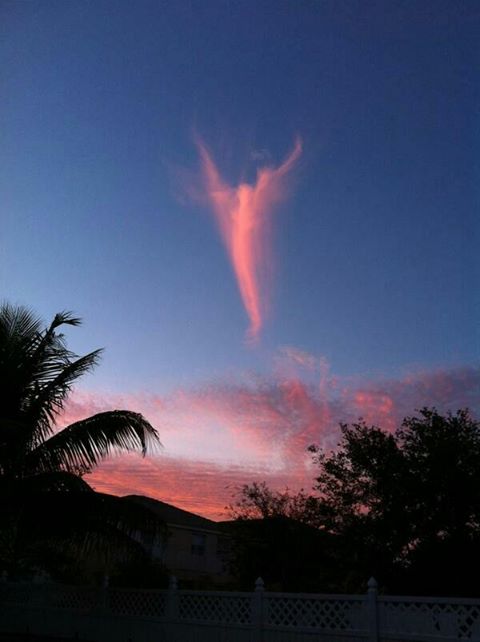 At the heart of dusk, the dazzling sunset accentuated a cloud formation that appeared in the shape of an Angel over Palm Beach Gardens, Florida.  It coincidentally happened on March 13, 2013 hours after the ascension of Pope Francis I to the Papal throne.   After much paranormal research, the team at Mystic Investigations concluded that it wasn’t merely a random cloud formation.  Many witnesses in the area were interviewed along with psychics, mystics, seers, priests, practitioners of Enochian magic, and other supernatural specialists.  Our investigation concluded it was in fact a real Angel of God from Heaven named Maxitron.  His appearance was not related to the new Pope directly.  It’s simply the fact that this will be the last Pope before the onset of the ultimate battle of good vs evil known as Armageddon.   It’s a sign within a religion that is believed by a lot of people.  Such belief is what gives Catholic artifacts, such as holy water, so much power when it comes to battling the forces of evil.

The Holy Angel Maxitron was tasked with heralding in the beginning of the end of evil in the Universe.  His ascension back to Heaven was a reassuring visible sign that would be recognized by supernatural and religious experts along with a plethora of paranormal beings.   It’s unknown when he descended here from Heaven but rumors indicate this was visible to only a select few at an undisclosed location where a sect of supernatural Priests awaited his arrival with special instructions from the Holy Lord himself.