What If Dr.Phil Was A Ground Hog? 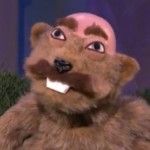 What if in a Parallel Universe there were sapient animal people such as groundhogs. Perhaps this includes TV psychiatrist Dr. Phil visiting Conan O’Brien in this reality via some kind of five dimensional wormhole. Alternatively, maybe some mad scientist placed Dr. Phil’s brain in a Groundhog or at least a puppet that somewhat resembles a messed up Punxsutawney Phil. Later on this so called woodchuck psychiatrist goes crazy and becomes a horror legend that becomes a fantastical fright in the annals of Halloween history! That is until he’s hunted down and eaten by none other than the infamous Jason Voorhees of Friday The 13th fame!🦔

We love all things Halloween! Whether it's glee of trick o treating, the iridescent allure of the autumn season, or the spooky mystique of supernatural beings. Enter the world of Halloween all year round on our All Hallows Blog.
View all posts by Halloween Haunter →
This entry was posted in Halloween Hilarity and tagged Conan O'Brien, Dr.Phil, Ground Hogs Day. Bookmark the permalink.