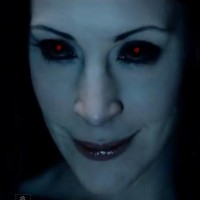 In a lone Transylvania church, a First Generation female vampire lies dormant in an open casket.  She was found locked away in a secret passage laden with Christian symbology, and artifacts in ancient catacombs beneath the centuries-old church.  She drained the blood of the three religious archaeologists who found her dormant body yearning for sanguine energy.  She was placed there by powerful priests hundreds of years ago after the street ran red with her blood lust.

Now free this sinister seductress begins romancing both men, and women before draining them of blood.  A blasphemous ritual designed to not only feed her but also capture their Souls for her demonic masters.  Her mind control games trick lust filled victims into selling their soul to the Devil! The Priest of the church sets out to capture, and this time destroy her after studying the symbols in the secret passage.  It seems her First Generation status along with her deep demonic worship makes her nearly invincible!

The pure of heart Priest manages to capture and return her to dormancy within the sacred church walls. Thankfully, she was still weakened from centuries of confinement.  Now in the open casket, he lights candles of holy fire as apart of a ritual he found in an ancient text.  Before this he tried to light her ablaze directly with said fires of the faith along with the usual other methods of vampire eradication. This included wooden, and silver stakes to the heart.  The flames wouldn’t even singe her, and the stakes didn’t even break skin!  Now only an ancient holy ritual is left to rid the world of this unusually powerful menace!

There is little time left as the especially powerful Priest can sense Vampire Knights are on the way to save her.  Those sent forth by ancient royal vampires who assumed she was dead but suddenly felt her sanguine life force surge forth briefly again.  She awakens as she channels the power of her demonic benefactors, and levitates about the church attempting to break through his holy force field courtesy of his religious artifacts, and unwavering faith.  Her hypnotic seductive powers break through his supernatural shield as his vow of celibacy is tested.  The priests momentary break in concentration gives way to a renewed burst of belief in his ability to channel his holy Lord and defeat this danger to the world.

The holy ritual, religious artifacts, and the priests power of pure thought finally penetrate the unholy demonic protections of the vampiress.  Her

fallen Angel based DNA begins to disintegrate amid the glow of enchanted energies. Her dark soul fades away toward Hell as she meets her makers to answer for the failure to fulfill her dark mission on Earth.  Perhaps it would have been better to remain dormant in her coffin? Meanwhile, the Priest prepares for multiple vampire visitors! Thankfully, Vampire Slayers are also on the way to save his life!