The Legend Of The Haunted Halloween Railroad

The Legend Of Lost Locomotive 13 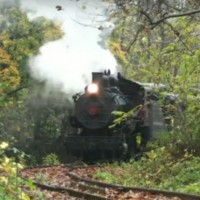 In the dead of the night at the height of the Witching Hour on All Hallows Eve an eerie steam chugging sound echoes about the Mystical Forest. A fantastical forest in the paranormally inclined town of Woodland Springs, Colorado.  Every so often a terrifying train whistle bellows through the fall foliage growing ever heavy with a foreboding fog.  A pitch black locomotive looms forth despite the post-mining abandonment of the rusty railway remnants.  In many spots, there’s nothing but dirt, stone, and brush with the ghostly train seemingly gliding over it like a supernatural specter.  Those who have had the courage to view the locomotive up close were faced with a spine chilling Engineer of evil glaring at them with eyes glowing a fiery orange.

The crimson caboose stands out from the rest of the dark train. A confused Conductor peering puzzlingly out the window into dead space with eyes as black as coal!  The passenger cars can be seen loaded with frightened children sitting near the front, and apathetic ones near the back with blank stares.  All sporting undead pale faces, and dark circles under their soulless eyes.  Some have even viewed this surreal spectacle inside their own homes as the train follows its old railway line even through trees, and buildings acting as an apparition of unholy origin.

Local legend has it that this horrifying haunted Halloween express is, in fact, the mysterious missing train of 1877 known as Locomotive 13.  The Engineer, the Conductor, and his 11-year-old son set out on the trains first nocturnal test run at Midnight on Halloween.  As the sainted sun rose that morning they never returned, and not a trace of the train was ever located.  However, beginning the next Halloween the lost locomotive would be seen inexplicably riding the rails. Locals attempting to jump on the train ended up falling through it to the ground, or the entire enchanted express simply disappeared before their very eyes. Unfortunately, one child under the age of 12 would disappear every year.  Often lured away from trick o treating, or from their safe beds into the dangerous forest.

son climbing aboard the stopped spectral locomotive. His desperate cries urging the boy to run fell upon deaf ears! His son appeared to be in a terrifying trance as he entered the evil express with the creepy Engineer staring down the Dad and handing his son a handful of wrapped candy.  He then fired off a sinister snicker as the train puffed away.   The Father tried repeatedly to hop aboard the slow-moving metaphysical machine but was unable to make physical contact as his biological body went through the supernatural structure.  Eventually, the train vanished in a billowing fog cloud.

such as Mystic Investigations, have studied this

paranormal phenomenon during its short stay each Halloween.  We’ve come to the conclusion that the train must have entered some type of traveling inter-dimensional portal that converged with our local supernatural hot spot known as The Heart Of The Mystical Forest.  An elusive force responsible for much of the paranormal activity in our town. Who knows what living Hell this train, and its passenger’s go through 364 days of the year before returning on Halloween.  Since the portal itself is probably invisible and appears only briefly, we have yet to locate it despite its annual clockwork schedule.  The train is clearly out of phase with reality until a child touches it. This indicates that their magical innocence, and probably its link to the Spirit Of Halloween, play some role in the trains reappearance. At the first embers of dawn when it re-enters the portal to parts unknown.  Perhaps it’s the Spirit that’s pulling it back from total disappearance into damnation? There’s also the possibility the portal is some kind of paranormal trap set by a non-physical entity of a malevolent nature who feeds off the children’s ageless astral energy.

Theoretically, it’s possible to re-phase the lost locomotive back into our reality with everyone biologically intact.  However, it’s unknown what the mental, and emotional state of these lost souls would be.  Certainly, it seems the Engineer is possessed by some dark force. Maybe the being who set this potential paranormal trap, to begin with. Perhaps this Halloween Mystic Investigations will finally solve this mystery, and save this damned train from kidnapping any more kids on what should be a Happy Halloween!

UPDATE: Last Halloween Slenderman attempted to board the train and save the kids….for himself! It might be a slightly better fate since Slender keeps children in an eternal sleep of pleasant dreams while feeding off their unique energy. He was able to board the train after several attempts. Almost as if he was modulating his teleportation frequency. However, once on board the Conductor blasted him with an eerie violet flash of light that sent him careening a mile away causing trees to fall in his wake! Psychics witnessed this and also sensed the train is a conduit to the Underworld where Dark Gods are sucking energy from the kid’s souls! This new information will help us formulate a future plan of action for next Halloween!

"The Legend Of The Haunted Halloween Railroad", 5 out of 5 based on 1 ratings.
Share This Story

I'm the President of Mystic Investigations. A paranormal crime fighting organization out for supernatural justice in a world full of darkness.
View all posts by Xavier Remington →
This entry was posted in Autumn, Ghosts, Halloween, Urban Legends and tagged Haunted Train. Bookmark the permalink.