You and your friends decide to partake of what should have been a harmless camping trip into the deep woods. Little did you know a US Paranormal Defense Agency transport truck had been shipping sensitive supernatural materials. Paranormal perplexities from a now closed secret underground base within said woods. One shockingly special container fell to the foggy forest floor unknown to the black ops soldiers on board. Your merry band of nocturnal trekkers explore the woodland in the light of the full Moon. Thankfully no Werewolves are afoot! Yet something seriously sinister lurks in your path!

You happen upon a high tech looking box emitting an eerie blue light. As your curious team strolls closer crimson lights flare in unison with a spine chilling alarm.  You all instinctively bolt away at first but then the sound suddenly stops. Everyone gives you puzzled looks as dead silence mutes the landscape. The first chirps of cricket cause you to cautiously walk back toward the box. Clearly, the mysterious container is motion activated since it starts wailing again as you near it! You move in closer after calming down and discussing what this futuristic object could be. 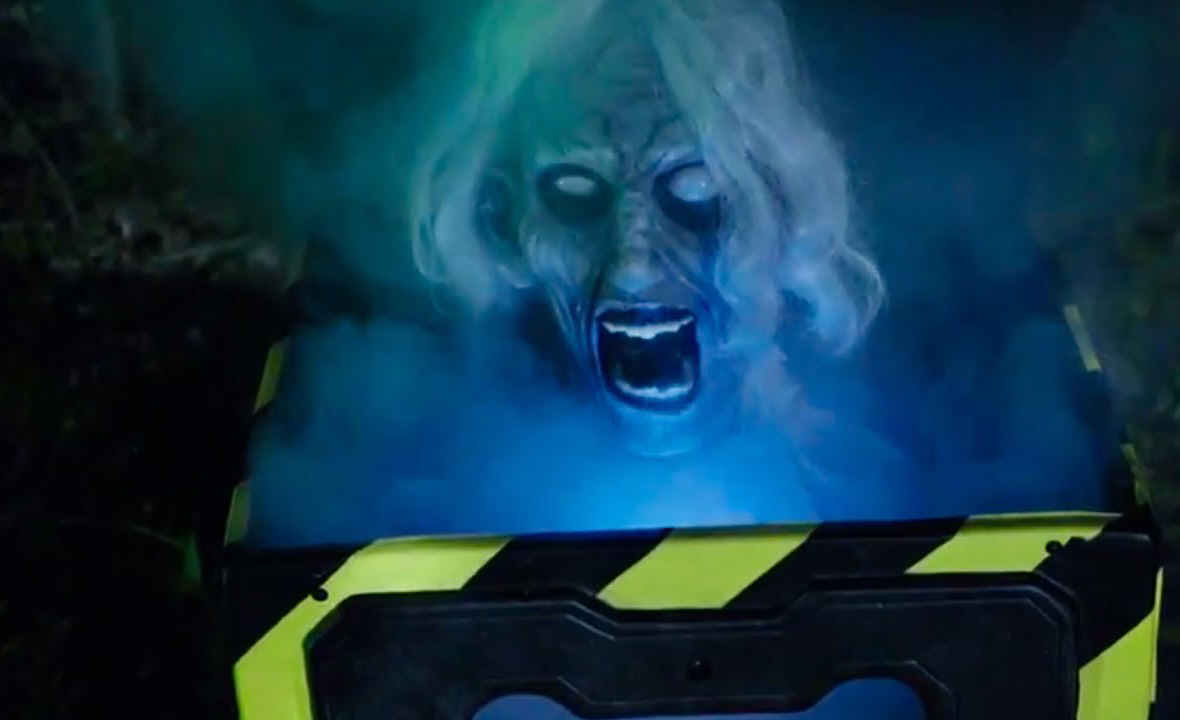 There’s a small window where the azure light illuminates from but it appears to have frost on the inside. Indeed it is cold to the touch. After getting acclimated to the crazy alarm you gain enough courage to begin pressing the glowing buttons on the box. The symbols on them don’t give you any clue as to what they do. A whooshing sound sends frigid air blasting on your faces as the container opens on top. Air ripe with the stench of cold death itself! A freaky fog flows out of the blue glow. With the stench dissipating, and the alarm falling silent, you all move in even closer to see what’s inside. Suddenly an otherworldly growl causes your hearts to skip several beats as a monstrous gray skinned Zombie lurches out at you!🧟‍♂️

The half frozen freak takes a bloody bite out of your friends jugular and forcibly grabs another. They’re both dead instantly! You and your other friend scamper away screaming in terror. After several minutes of full speed running you collapse exhausted on the muddy ground contemplating the unspeakable horror you just witnessed. It was a bad idea leaving the smart phones back at camp for the sake of completely communing with nature!  You slowly get up to make it back there but your two other supposedly dead friends appear in front of you. Their sickly pale faces blankly stare at you as they begin to make guttural growling noises. They are now members of the living dead! The zombies move toward you and the friend near you cries out in agony! You’re shocked to see the box zombie biting into their shoulder. You find yourself knocked to the ground by your two zombified friends who end up devouring you like the zombies they have become!

The Horrifying End To A Camping Trip Gone Supernaturally Wrong!

Ultimately, the original zombie and your two Walking Dead friends are the only survivors. That is if you can call being a mindless cannibal surviving? Who knows why some zombies only take a few bites from some while eating others whole? Some of these people are merely those who managed to escape the zombies grip. The living dead survivors stagger through the forest into the daylight hours eating every animal in sight. As they make it to a roadway they are blasted away by machine gun fire. The US Paranormal Defense Agency has rectified their foolish mistake.  The government cleans up all evidence and takes extra measures to prevent their supernatural experiments from escaping in the future! You and your friends become those multitude of people who go missing every year. Especially in secluded woodlands across America! You’re news and stories on shows like Unsolved Mysteries. Ultimately, your existence fades away as mere memories in those who knew  you.🧟‍♀️

If it was 2017 you could own this horrifying infrared sensor activated box for your Halloween haunted house and the scary delight of Trick-O-Treaters. Unfortunately, it is no longer in production and cannot be found anywhere for sale. Not even Ebay! Learn about this lost Animated Frozen Zombie Pop Up Box Prop known as the Cryo Chamber Corpse Animatronic that was a unique fan favorite at Spirit Halloween.