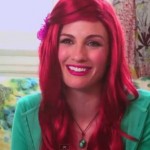 One of the most famous Mermaids on Earth, Ariel, breaks up with her first human love Prince Eric.  She ends up staying with some extremely ungrateful friends who seem to be sick of her innocence, and naivety.  Both these fools should be in a state of mystical bliss in the presence of a Goddess  like mermaid.  Mermaids are some of the most alluring supernatural beings on Earth along with possessing powers of strength, speed, agility, enhanced senses, hydrokinesis, faunapathy, echolocation, and various other powers including immortality.

If she was a human she might get annoying after a while but in the case of a Mermaid her supernatural charms would nullify that.  Clearly there’s something wrong with the human man, and woman in the video above.  Perhaps they’re under some dark curse from an evil sea witch.  Although plausibly the woman could be immune to Ariel’s allure since she displayed faunapathic powers when she heard the animals singing.  No normal human should be able to hear that.  She better hope she has some other powers because when some street punks break in randomly late at night both those silly fools are going to wish Ariel was there to protect them.

Whatever the deal is with these rotten people they do not deserve the rare pleasure of having Ariel live with them.  That is why we extend a warm welcome for Ariel to stay at Remington Manor with Demi-Mermaid Rebecca Abernathy whose mother was a Mermaid. Ariel can reside with us for as long as it takes for her to make up with Prince Eric or move on to someone more worthy!