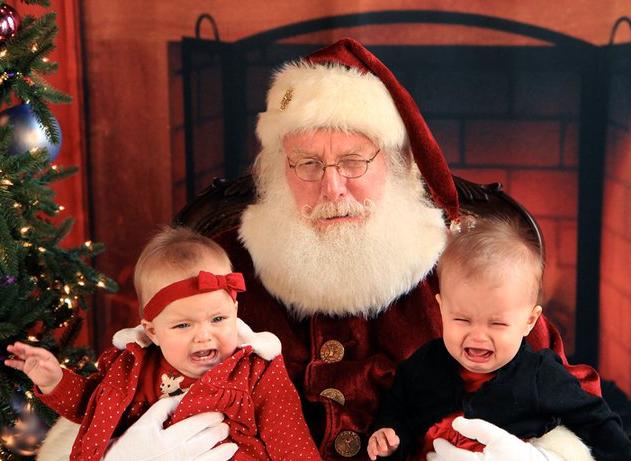 There are some children who are inexplicably scared of anyone posing as Santa Claus. Generally, it is the younger ones. Some might say kids are afraid of Santa Claus because he looks just like his Demonic twin brother the Anti-Claus. However if that was the case then kids shouldn’t be afraid of the Father Of Dark Christmas because he looks like Santa Claus.  In reality, it isn’t Santa Claus they’re scared of but rather the fake Santa Claus’s who work in Malls, and other places during the Christmas season.  Obviously, the stranger anxiety felt by small children coupled with suddenly being placed on the lap of an odd-looking old guy causes them to cry sometimes.

The rare Mall Santa who truly lets the Spirit Of Christmas dwell in their heart doesn’t frighten children. These are the ones who believe in Santa Claus to a certain extent. If you happen upon a Claus that doesn’t cause your child to be alarmed, and in fact causes them to smile, then you may have such a Santa. If you’re really lucky then it might be the real Santa Claus who sometimes places himself in the position of a mall or party Santa. If the child is insanely scared beyond belief for no reason then you may very well have the sinister Anti-Claus or some other evil entity on your hands. We recommend running away immediately no matter how silly you look!

Certainly, I’ve personally witnessed babies, toddlers, and children of all ages at the North Pole beyond joyous in the presence of Santa Claus. Heck, even the adults are as well!  Santa Claus is a nice guy but before anyone even speaks to him his enchanted Demi-Angel energy aura saturates the general vicinity with joy and peace.  It’s amplified to an even greater distance by the Spirit Of Christmas. It’s the reason all stress, and anxiety burns away upon first entering North Pole City.  All that is undesirable about the outside world is forgotten as you feel what it’s like to be a child again!  The ultimate Christmas experience is here at Santa’s Arctic home base!🎅