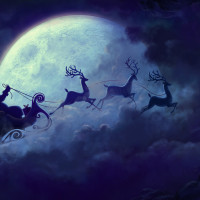 For the first time since 1977 the Full Moon falls on Christmas Day at the perfect time of 11:11 UTC (Coordinated Universal Time).  The Full Moon of December is always known as the Yule Moon in the paranormal community unless other factors should come into play.  This time around it shall be known as The Christmas Yule Moon, or simply The Christmas  Moon.  The Yule Moon is known to dull the violent tendencies of sinister supernatural entities. This goes further for Werewolves who mostly transform into gentle Albino Lycanthropes who only crave vegetation rather than humans, or animals. This is due to the Demi-Angel Santa Claus, and the Spirit Of Christmas taking over the metaphysical lunar energies away from the forces of darkness.  Normally the Moon’s light is considered unholy to an extent with  the Yule Moon considered virtually holy in nature.  Still various paranormal beings repelled by holy light could still venture out. In the case of this Christmas Moon it will in fact be 100% holy light!

This holy light, although far duller than sunlight, can cause vampires, and some other demonic based beings to incinerate.  Most others will be

repelled by the light. Vampires will loose their craving for blood, and become quite weak for a great many days. During the 100% Full Moon they will temporarily transform into humans, and then may walk in the pure holy lunar luminosity.  The same thing will happen to Demi-Demons as well. That includes the Anti-Claus if he is lurking about.  Humans stricken with the Werewolf condition will not transform at all!  All Zombies on Earth will fall into a harmless dormant state until the Moon is at 70% of Full!  However oddly enough, courtesy of Frosty The Snowman’s life force, some Snowmen might come to life, and stagger about like a zombie.  Don’t worry they’re harmless.  As harmless as the Abominable Snowman, aka Yeti, will be during this spectacular Moon.  Dark Ghosts, Poltergeists, and Demons will have their energy sapped away causing them to disappear from our reality.  Haunted House paranormal activity should cease for at least 4 or 5 days.  Practitioners of Black Magic will find their powers dampened by the Christmas Moon along with a wide range of evil entities.  We’re even getting word that Slender Man has retreated to his hidden lair because the Christmas Spirit won’t let him get anywhere near a kid. Without sapping away energy from innocent children he is greatly weakened! In addition the newly resurrected Jason Voorhees of Friday The 13th fame will probably just sleep for a great many days during this time.  Even regular humans who dwell on the dark side will mellow out, and give their wicked ways a rest for a good chunk of the week.

On the other hand supernatural beings of righteousness will have an increase in powers.  Especially Angel based beings like Santa Claus. Thus far we

hear his deliveries have gone smoothly without the usual attempts to stop him. Those practicing White Magic, and particularly those who delve into Enochian Magics will see massive increases in their enchanted energies.  More Angels will dwell upon the Earth as well. That along with the Christmas Moon’s lunar energies will magnify the Spirit Of Christmas thereby fostering a great deal of good will, and peace among humankind. If there was ever a time for those of us in the supernatural crime fighting community to take a break then it would be now!  This Christmas Moon has greater power than a shooting star, and wishes are more likely to occur if you wish hard enough, and let the Spirit Of Christmas infuse your very soul!  The crisper white the Moon the better! Finally for at least a good week, through New Years Day 2016, humans can walk out at night, even in the Witching & Devil’s Hours without worry of supernatural attack! Merry Christmas, And Happy New Year From Mystic Investigations!