Posted on December 8, 2011 by Xavier Remington 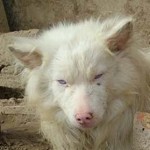 The full Yule Moon of December is imbued with the magical Spirit Of Christmas.  Therefore a good number of humans afflicted with the Lycanthropy virus will not transform during the silent nights of this full moon.  However older Werewolves will transform.  Those humans who have been Werewolves for 7 years or more.  During this mystical Christmas season we will witness the annual miracle of docile albino Werewolves that are vegetarians, and lack aggression of any type.  Their size, and appearance is greatly reduced as well so that they appear more wolf life rather than monstrous.  They will forage quietly through the snow looking for roots, and any plant matter they can find.  The albino Werewolves may howl every so often but it will clearly be non-aggressive in nature.  They will often gaze at the North Star as feelings of hope, and goodness wash over them from Santa Claus’s North Pole Fortress Of Light.  This is all thanks to the Yule Moon’s neutralization of the Werewolves demonic DNA.  However some things like Friday The 13th, magic, and Werewolves who control their transformations will still create the rabid monsters we are accustomed to. 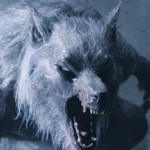 We’d say you could indeed approach them, and pet their soft white fur but there’s the possibility you might mix them up with real all year round albino Werewolves.  These variety of Albinos are the most deadly, and demonically ferocious of all Werewolves.  This is due to the fact that they are pure blood Werewolves born of a mating between two transformed Werewolves during a full moon.  The resulting Werewolf is born devoid of human form and a human soul.  It remains a Werewolf all year round whether there’s a full moon or not.  Although the level of their power is dictated by the fullness of the Moon.  This type of Albino Werewolf is not to be mixed up with two humans afflicted with the Werewolf virus mating in human form.  In that case the child is born a normal human with perfect health, and sometimes mildly enhanced abilities.

Since it’s beyond rare that two fully transmuted Werewolves would mate, the Albino pure breed Werewolf is very rare as well.  This is why we’ve never had a warning or watch about this creature.  Spotting one is a once in a lifetime event.  They spend most of the year at the Arctic, and Antarctic circles killing polar bears, penguins, seals, and the occasional polar scientist for food.  However with the onslaught of winter they can move into populated areas.  They tend not to attack as they have some demonic intelligence, and know their white fur alerts Werewolf hunters from around the world.   It’s slim you’d run into one but just to be safe we recommend not approaching any white Werewolf.  If you should run into a pure blood Werewolf you’re already dead unless you’re an experienced Werewolf Warrior.  The usual repellents, and eradication measures don’t work very well.  This includes silver bullets.  It takes major paranormal fire power to take down these hellish hairy horrors clad in snow white camouflage.

I'm the President of Mystic Investigations. A private paranormal crime fighting organization out for supernatural justice in a world full of supernatural darkness.
View all posts by Xavier Remington →
This entry was posted in Christmas, Lycanthrope, Werewolves, Yule Moon. Bookmark the permalink.