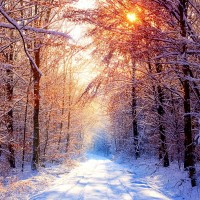 The Northern Hemisphere Countdown To The 2015 Winter Solstice is nearly winding down.  The shortest day of the year falls on Tuesday, December 22, 2015 at 4:48:00 AM (UTC time). When utilizing time zones other than Coordinated Universal Time it falls on December 21st.  For instance December 21 at 10:48 p.m. in the US Central Time Zone.  The Winter Solstice is the time of year when your hemisphere tilts the furthest away from the Sun.  In the world of the supernatural longer nights mean more time for nefarious entities of evil to wreak havoc! Thankfully the already mounting power of the docile Yule Moon, coupled with it’s transformation into a rare Christmas Moon, is giving us a lot less paranormal activity of a dark nature.

Deep in various sparsely populated rural areas various practitioners of good magic will be holding Winter Solstice Yule rituals for Winter Goddesses while welcoming local Winter Nymphs, Fairies, and other nature deities into the area.  If the Solstice happens to fall between the Witching & Devil’s Hours in your particular time zone then you might possibly see the brief manifestation of Snow, and Ice Nymphs, or Fairies.  Areas experiencing the unseasonable warmth of El Nino probably won’t witness any winter deities.  El Nino is the result of various Godly factions at war.  Their in fighting is one reason why they’ve never been able to defeat the Demons.  So warm weather swirling into any given region is also bringing Summer Goddesses, Nymphs, and Fairies with it!  If any violent storms occur then most likely the Winter, and Summer deities of opposing higher dimensional God factions are at odds with each other! Sometimes Autumn, and Spring deities attempt to intervene, and mediate peace.  Other than the weather there is no risk to humans from these unseen supernatural battles.