Posted on August 13, 2015 by Paranormal Forecaster 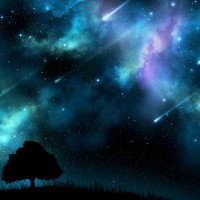 The Comet Swift-Tuttle has been giving us the pleasure of the Perseid Meteor Showers.  Comets are notorious for being vessels of metaphysical energy along with containing inter-dimensional stowaways.  The shooting stars they create can contain an energized form of supernatural beings attempting to stealthy come to Earth in defiance of any Guardian Angel defenses.  That has been the case sporadically over the last couple of nights with various Fallen Angels, Jinn, and other higher dimensional entities illegally immigrating to our planet.  No matter what the source of the metaphysical energy is there is a chance that wishing upon a star will grant a wish due to the metaphysical energy interacting with the human consciousness that naturally connects with our powerful higher dimensional souls.  In addition some shooting stars may contain one or more Psychokinetic Powers that are simply errant energies from higher dimensional Angels, Gods, and other energized entities.  Of course the jackpot would be a ray of light from the Omniverse God thereby granting you the full array of Psychokinetic Powers, aka Omnikinesis! Basically once your eyes make contact with the light of the meteor your DNA is re-programmed to give you the power.  The metaphysical light is in essence the carrier of a paranormal program.

enchanting event for the Witching Hour of the New Moon on Friday August 14th.  Certainly the darkened New Moon skies provide a better chance of seeing the final Perseid’s but there is also a supernatural element.  The first shooting star of the first minute of Midnight will contain a celestial message from the Galactic God Orbislacteus to our Earth’s Goddess Gaia.  Anyone gazing upon it’s light will be sub-consciously programmed with the knowledge of the entire Milky Way Galaxy.  The person won’t gain powers but the knowledge will super charge their brain making them the smartest person ever!  In addition their sub-conscious, and conscious may merge creating a super-consciousness that would allow them to re-program their own DNA allowing for Omnikinesis!  Good luck to those vying for the ultimate power tonight!

Orbislacteus always sends regular monthly messages to Gaia during the New Moon since there is no metaphysical lunar interference. The message itself appears in the Witching Hour’s of every time zone on Earth since the message is four dimensional in nature. During this particular New Moon the Swift-Tuttle Comet intercepts that message, and temporally amplifies it into multiple Midnight meteors.  This mean there are 24 chances of grabbing this paranormal prize. In addition the reason why 24 human created time zones have supernatural sway is due to the paranormal power of the human collective consciousness.

When You Wish Upon A Star
Legend has it that the first falling star of any given day on Earth, outside of any special

event like the Perseid’s, can grant a wish to the first person who sees it.  The Ancients say it was Goddess Gaia’s original gift to Humans upon their evolutionary birth as Earth’s second sapient species.  The first were Dinosauroids that evolved from Dinosaurs millions of years ago.  However it’s beyond rare that a person actually spots the first true shooting star of the night.  Incidentally a camera, or watching it on a video screen doesn’t count.  The light has to directly make contact with human eyes so a metaphysical interface can be completed.

Wishing upon any shooting star you see has some chance of working even if it is astronomically slim.  This is due to the possibility of paranormal energies contained within as mentioned in the beginning of this article.  Large scale meteor showers like the Perseid’s simple increase the chances of your wishes coming true!

Help Out The Make A Wish Foundation