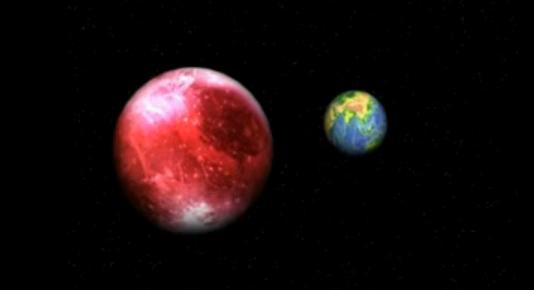 To the average human on Earth, it appears nothing happened on the fabled 2012 Winter Solstice.  However the supernatural beings of the world felt something, and those of us humans in the world of the paranormal knew what was going down as well.  The Earth was very nearly destroyed by the magically cloaked planet Nibiru, aka Planet X, along with a thwarted Polar Shift that could have caused its own widespread mayhem.  The galactic alignment of the Milky Way center with the Sun-Earth plane took place.  The progression toward alignment over the months of 2012 had resulted in an increase in powers seen in all supernatural beings. The pinnacle of that power should have been at 11:11 AM on December 21st, 2012 yet what we saw instead was a total lack of powers across the board for one minute.  Several minutes before there was a gradual weakening.

11:11 AM was the exact moment the rogue planet Nibiru was blocking and absorbing the energy of all celestial objects including the Earth itself.  Does this suggest that all supernatural power derives from the Earth, Galaxy, and other celestial entities?  The Earth’s energy, aka the Goddess Gaia, might be responsible for powering up some beings but certainly not all.  The galaxy, sun, moon, and other objects in space might provide some power but we feel they are most likely conduits for transporting energy to this reality from the higher dimensions, and perhaps even other parts of our Universe.  Beings such as vampires became weak as humans, and various non-corporeal beings such as poltergeists disappeared.

It seems the Planet Nibiru was under the complete control of its spirit the God Nibiru.  Psychics on Earth could sense the fear of the Nibirun populace who are at the mercy of the Nibiru God.  Unlike Earth’s spirit, the Goddess Gaia, who isn’t allowed such command, and control of the planet due to the Omniverse God having a special interest in humanity.  The Nibirun’s were creations of the God Nibiru himself.  He was once a higher dimensional being who was shunned from his community and imprisoned as the soul of a huge red planet.  He created the Nibirun’s to amuse himself, and give purpose to his life.  In the distant past, he became enamored with our Earth, aka Goddess Gaia.  She spurned his love because she sensed his evil.  At a time in the past where she was far more powerful, she thrust him away into deep space.  Only on the winter solstice 2012 was he able to finally return to force himself on Gaia.  Gaia is greatly weakened now due to all the evil supernatural, and human beings on Earth.  Especially the paranormal beings that sap her power, and the humans who desecrate her body, the Earth itself. This includes widespread population, secret weather control, warfare, and the general destruction of her surface.  Meanwhile, Nibiru has more power not only due to being larger and absorbing more but also the access to the power of the souls of the Nibiruns who dare not harm their God Master.

We at Mystic Investigations through the fate of the Universe acquired two swords.  One of good, the Sword Of Judgement, and one of evil, the Sword Of Dagon.  Their origins are shrouded in mystery but some evidence indicates they come from Earthly Gods and Demons.  The Sword Of Judgement may be the product of all the various leaders of the Earthly God factions, including Celtic, Greek, Roman, etc., coming together to forge not only a sword for that can only be used for good but an alliance for the time of Armageddon.  Sword Of Dagon was a creation of the Archdemon Dagon who serves on the Devil’s Unholy Counsel Of 13. He is the father of the first generation vampire, and King of The Vampire Empire known as Dagan.  The Archdemon Dagon also posed as a Babylonian God known as Dagon.  It’s not known what the purpose of the sword is but it’s clearly the evil counterpart of the Sword Of Judgement.  It’s unknown which sword was forged first.

Various ancient scrolls led us to two ancient stone Kiosks at each of the magnetic poles north, and south.  The origin of these kiosks is the same as the swords.  From Earthly Gods, and Demons.  Both wishing to access the power of Gaia with the swords acting as keys.  At the appointed time Mystic Investigations President Xavier Remington placed the Sword Of Judgement into the North Pole Kiosk while Senior Vice-President Drake Alexander, temporarily evil at the time, simultaneously placed the Sword Of Dagon in the South Pole Kiosk.  This released a gargantuan power burst from the soul of Gaia that created a massive shield around the Earth.  Its blast-like appearance was so powerful that it shot Nibiru away into deep space once again.  This mystical power release also halted the polar shift that was about to occur once Nibiru was away.  The current whereabouts of the planet God Nibiru are currently unknown.  However, it seems the Gaia power burst has fried his brain for now.  In addition, the evil sword caused Drake Alexander to split into two bodies.  Our original Drake, and what we call the Dark Drake.  The Dark Drake is still on the loose perpetuating evil on the world.  He claims to be the Second Son Of Satan here to find a prospective mate for his Father so that his brother the First may be born into this world as the Anti-Christ.  The Dark Drake currently possessed the Sword Of Dagon.

After the weakened state of all supernatural beings on Earth, there was a huge power boost caused by the release of Gaia’s energy along with the re-exposure of the Galactic Alignment.   These additional powers are expected to stay with most beings at least until Summer 2013.  Since everyone got it there’s no additional disruption in the balance of good, and evil. So not to brag but Mystic Investigations saved the Earth…with a little help from some mystic swords.  No need to thank us!  We love our jobs, and are happy to save all of you out of the goodness of our hearts!