A Leprechaun had been attending to the official business of good luck in Nova Scotia when one of his lucky charms was pilfered by a lobster on the shores of the Atlantic Ocean.  The startled Leprechaun immediately dove in after the thieving lobster but before he could retrieve it a whale swallowed the little fella whole.  After lying in darkness for a while the Leprechaun finally mustered up the power to launch a micro teleportation rainbow out of the behemoths blowhole. Leprechauns travel around the world via a network of mystical rainbows always in existence.  The vast majority out of the range of human vision.  Only rain showers make them visible to the general populace.  A Leprechaun with enough luck can create small rainbows of their own when the network doesn’t connect to a location.

The Rainbow Transport To Freedom! 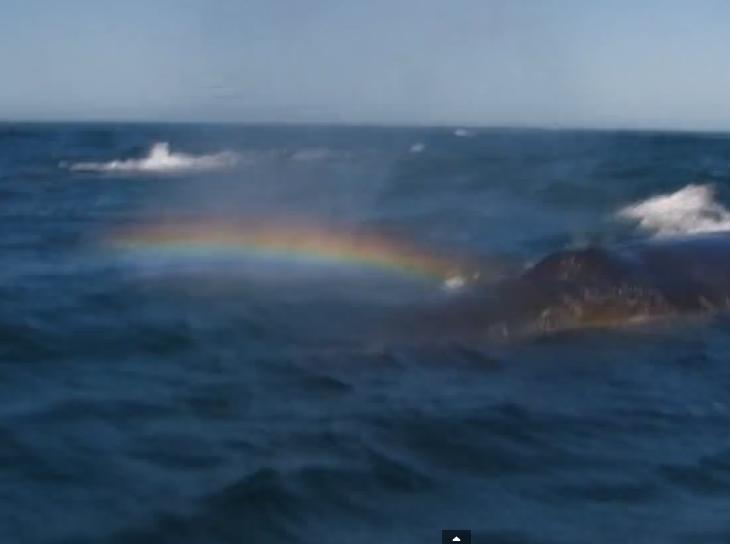 A tourist caught the spectacle on camera.  The rainbow containing the Leprechaun in a temporary metaphysical energy form is captured on film. After that the rainbow shoots into the ocean where the Leprechaun materializes underwater and tracks down the lucky charm lobster larcenist.  Luckily the Leprechaun found an ocean rainbow to travel safely back to Ireland.  Although the rainbow made a stop at the Mermaid undersea city of Atlantis first.  It’s theorized this little bout of bad luck was caused by a Clurichaun, aka Dark Leprechaun, in vicinity.

This report is courtesy of The Legendary Book Of Leprechaun.  A historical record kept by the Leprechaun people.  The supernatural book is continually updated by Leprechauns. Unfortunately, those of us in the paranormal community allowed to gaze upon the book are only given brief access every few years or so.