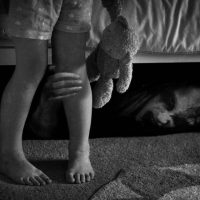 The sinister Slumber Slaughterer is an Urban Legend originally hailing from early Yazoo City, Mississippi. Sometime in 1972 a twentysomething cotton mill worker named Elmer Ray Beesley claimed he was contacted by the infamous ghost of the Yazoo City Witch. The wayward witch is thought to have been the cause of a devastating May 25, 1904 fire that took out half the town!  Apparently Elmer had been taking a stroll through the Glenwood Cemetery in Yazoo when he happened upon the witches haunted grave. He dared to walk on it as he felt a surge of metaphysical energy fly through him. There she spoke to Elmer telling him it was time to no longer keep his murderous urges bottled up. A violent rage that stemmed from an unstable childhood that involved abusive alcoholic parents. He hid under his bed during their ferocious arguments that often involved each of them taunting the other by bringing their respective lovers home. Needless to say Elmer’s childhood was strewn with sleepless stressful nights. At the age of 8 his parents ended up literally murdering each other during a violent struggle. This ended up knocking a candle over which started the house on fire. Elmer was left with some bodily disfigurement due to the burns. This prompted him to grow his hair long in order to hide the burnt left side of his face.

Elmer spent 4 years in a small orphanage and was sent to public school where he was mercilessly bullied over his looks, and lack of parents. At nearly age 13 he seemingly disappeared but was actually sneaking into homes, and hiding beneath their beds. While the house occupants still slept at the crack of dawn he would slither out from underneath their bed to ransack the house for supplies. He’d take his bounty out to the nearby swamp now known as the Panther Swamp Wildlife Refuge. Despite his dad being more or less worthless, Elmer had picked up some basic carpentry skills from him and utilized that to eventually build a small shack. Although he did catch fish for food, the majority of his survival relied on theft until repeated arrests finally motivated him to get a job at the cotton mill.  Even at age 20, he wasn’t treated much better by the so-called adult employees at the mill.  He was definitely the town outcast, and his daily thoughts were consumed with rage-filled revenge. However, he continued to keep his urges under control with nothing more than a tenuous strand of morality set to snap at any moment!

Then that fateful day in 1972 the Witch Of Yazoo City pressed her hypnotic spirit upon his already disturbed mind. That on top of the fact that he suffered from insomnia, and occasional night terrors when he wasn’t sleeping under someone else’s bed. So he vowed to return where he felt most at home. Under the beds of potential innocent victims such as yourself! An hour later he was outside the home of one of his top tormentors since childhood. A twenty-something named Joe Bob McAdams, who still lived with his parents. Elmer cautiously approached the house with careful confidence in the belief that everyone was at work. He smashed through a back porch lattice to access the crawl space under the home.  An ideal location to stash the bodies he was about to amass! Elmer easily came up through a door in the floor and helped himself to some treats in the refrigerator before surveying the layout of the house. He even sat upon their toilet for an hour reading dirty magazines. He purposely chose not to flush!

Elmer sat in the living room recliner watching TV with the window open a crack so he would hear when someone drove into the driveway. Once he heard a car pull up he quickly hid under Joe Bob’s bed. It was Joe’s Mom. Minutes later his dad came home, and not long after that he yelled,”Son of bitch Joe Bob left a steaming dump in the bowl!” Elmer strained to stop his laughter from bellowing forth! Earlier he had helped himself to a boning knife he found in the kitchen. Most likely used to prepare freshly caught fish he’d spotted in the fridge. He could have finished off the parents at that point but it only felt right to do this from the safety of the bed crawl space in the darkness of night. A magical time when victims would reside in the drowsy confused state of being half asleep. So he lie patiently under the bed with knife in hand.  It was easy for him to lie there for hours on end letting his imagination entertain him as it had during his tumultuous childhood of horrifying hell.

Hours after the parents had gone to bed Joe Bob finally stumbled in at the Witching Hour clearly drunk. His overweight form plopping into bed pushed the mattress weight slightly upon Elmer. Fortunately, he was very skinny, and could easily slither out if he had to. However, he awaited the right moment whether by his creation or by coincidence. After a few hours of loud snoring Joe Bob slowly got out of bed to use the toilet. Elmer heard the toilet flush, and as Joe stumbled back in through the darkness the boning blade swiped forth from under the bed. Joe noticed it gleaming in the moonlight filtering in through the window before he felt excruciating pain in his ankles!  Blood spurted everywhere including Elmers smiling face. Joe Bob fell to the ground screaming in terror while Elmer crawled from under the bed, and got on top of Joe face to face. He then snickered sinisterly, and whispered, “Who’s the bitch now!” Elmer then expediently exterminated Joe Bob with his knife.

Both of Joe Bob’s parents came running in yelling his name. Elmer slid back under the bed. They entered the room to witness the bloody carnage of their now deceased son! His Mom knelt beside him sobbing profusely as Mr.McAdams called the police from the phone in the living room. At that moment Elmer snatched Mrs.McAdams and pulled her underneath the bed while holding his hand over her mouth to prevent her screams from being heard. He mercilessly murdered her and tucked her against the wall the bed was resting against. Mr.McAdams came back into the room after calling the cops and called out for his wife.  Caught in the shock of his son’s murder, he had not thought that someone else could be in the house until that moment. He immediately ran to get his shotgun from the hall closet. That was when the Yazoo Witch whispered to Elmer, “Leave now through the window!” Elmer opened the window and leaped out before Joe Bob’s dad saw him. He disappeared into the night without anyone having a clue what he’d done until several years later.

After many years of vengefully murdering the townsfolk in their half sleep he became the number one suspect, and a warrant was out for his arrest. The authorities made a beeline for Elmer’s swamp shack but the ghostly Yazoo Witch warned him away in the nick of time. He never returned to town, and radiated his reign of terror forth to bedrooms across the United States. He was always careful to move on to another town very quickly after one of his murder sprees. Especially with the witch warning him when his capture was near. He was eventually dubbed the Slumber Slaughterer by law enforcement. As of the writing of this story the last murder linked to him took place on February of 2017 in Clarkfield, Minnesota. There he literally pulled a couple making love right out of their bed, and underneath into his private crawl space of terror! They went from the ultimate pleasure to the ultimate pain in less than 20 seconds!

This would be extremely amazing for someone who should be pushing 70 years of age, or anyone else for that matter. Decades earlier top secret US Paranormal Defence Agency investigators learned he was immortal due to every murder being a sacrifice to the Yazoo Witch. She, in turn, fed him her dark spiritual energy. Energy she drained from the slain human souls, and in turn transmuted to negative power. The Slumber Slaughterer is thought to physically be in his mid 30’s and will remain so if he continues his sinister sacrificial ways.  When this case turned paranormal the US government did a complete whitewashing of the entire case deleting it from all records and mentions in the media. Even paying off witnesses, and keeping everyone quiet. Something always done with all things supernatural so as not to alarm the public about something they couldn’t possibly defend themselves against.

Elmer The Slumber Slaughterer is extremely dangerous due to the large amounts of dark spiritual energy surging within along with the standard superhuman traits that serial killers possess. He has enhanced strength, speed, agility, and senses. He also has a somewhat developed sixth sense along with being telepathically linked with the ghost of a powerful witch. Elmer has shown evidence of being bulletproof, and all attempts at killing him have failed. We can only assume complete incineration by fire, or beheading would abolish this diabolical denizen of darkness from the Earth! He even had a special supernatural silver blade made for him in the Arizona desert by dark Shamen.  It’s said to slice through steel like paper!

The only thing we have on our side is his predictable ritual. Despite his rise to paranormal power he still can only kill underneath victims beds. We can’t say if this is his weird quirk or he is bound by some dark force to do so. Either way, we highly recommend always checking underneath your bed with a flashlight before bedtime. Make sure you’re at least 6 feet away before bending down to look because that bastard will lunge out with his knife! Better yet have an enclosed bed foundation, one with drawers, storage, or even packed with stuffing of some sort! That is the only way you can be certain that your lovemaking and nocturnal trips to the crapper won’t be interrupted by the Slumber Slaughters sharp slices of death! Sleep soundly…with one eye open!  [Twitter]