The unfortunate man in the video above was programmed by a Voodoo Witch Doctor to be a virtual puppet.  The man whipped up every ounce of willpower to enter his Master’s Voodoo Webinar Room as the magician left to use the crapper. A live-streaming camera captured his painstaking attempt to neutralize his own Voodoo Doll.  Theoretically what he did should have caused serious injury but one cannot make any personal changes through their own Voodoo doll.  So thankfully there was no neck snapping or beheading as he ate the head of his own Voodoo Doll!

The Neutralizing Of A Deadly Voodoo Doll! 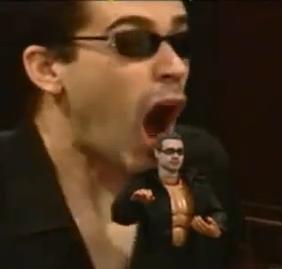 This video was seen by some in the supernatural community who eventually came to his aid. Apparently, the man was caught crawling out of the house since he only partially neutralized the doll. The Witch Doctor was about to punish him when paranormal professionals, including various witches and wizards, took down the blasphemous dark magician! It probably wasn’t the smartest move to live stream his evil deeds even if it was on the dark web. The doll was destroyed in a proper manner and the man was freed.  Today this valiant individual is living a normal happy life despite his brush with the diabolical world of dark magic! In his free time, he works to help those who have been victimized by vexing Voodoo magicians.😮