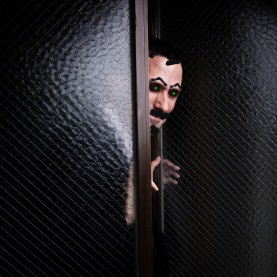 This is the first confirmed true story of the Door Man Urban Legend.  Our story starts with a paranoid individual named Porter Canterbury. He was a timid, and skinny man in his early 20’s. After much effort, he managed to finally get a woman in his apartment building into his bedroom for a maiden voyage into the realm of lust. Unfortunately, the sadistic peeping heavyset handyman with master keys had seen the couple enter the apartment, and decided to let himself in.  The pervert crawled into the dimly lit bedroom undetected as Porter neared ever closer to ultimate ecstasy.

A Romantic Interlude Interrupted By A Blasphemous Bully

The handyman was a lifetime bully who relished in messing with those he perceived to be weaker than himself. He snickered silently and hid behind the open bedroom door.  When the act was complete Porter got out of bed to use the bathroom, and just then the handyman slammed the bedroom door closed to reveal himself. He roared loudly while flailing his arms.  Porter fell to the floor crying in the fetal position completely naked while the creep laughed maniacally.  The peeping perv then looked at the woman in bed, and said, “What a pathetic loser you just slept with! I can barely see his willy!” He then shook his head and left chuckling.  The woman urged Porter to go after the bully or at least call the police but he just sobbed on the floor. She left in disgust.

The Obsessive Compulsive Urge To Check Behind Every Door In Sight!

After that incident, Porter became deeply paranoid about doors not being flatly opened against the wall upon entry, or fully closed while inside. When opening a door he’d also pull it back, or push it forward slowly making sure nobody was waiting on the other side.  Despite attempts at psychiatric therapy he would obsessively push doors flat against the wall, and check behind them repeatedly everywhere he was! This was just one of many phobias he had acquired in his cowardly life. Ultimately, growing up in a tumultuous home of poverty with unstable parents made him what he was.

The Minute A Phobia Is Cured It Becomes Reality

Porter’s door phobia went on for over 15 years until his late 30’s when he met a beautiful psychologist became his girlfriend despite the ethical conflict of the relationship.  He now lived in a house and had a ritual of checking behind the front door when he entered, and then proceeding to every door, and closet in the house.  One day after coming home from work at about 6 PM he was feeling happy, and confident about going out with his girlfriend later on.  As he unlocked the door and entered he didn’t turn around to see if anyone was there.  He decided this would be the first day he would no longer check behind doors ever again.  He got a drink in the kitchen, and then went upstairs to lay his clothes out on the bed before going to the bathroom to take a shower. Upon returning to his bedroom he noticed the door that had been flat against the wall was now moved outward a bit.  He told himself he was imagining things, and that no person could even fit behind that anyway. He ignored it and walked over to the bed to get dressed.  Unfortunately, the dastardly Door Man hidden behind the door pushed it open!

The First Confirmed Kill Of The Door Man Serial Killer!

The creepy looking Door Man looked somewhat deformed as if slightly flattened by a giant iron.  His completely black sunken eyes suddenly displayed glowing green pupils as he slowly regained normal slender human form with a height of 6’6″.  Door Man smiled with dark glee as he sneaked up behind Porter, and screamed, “Boooooooo!”  Porter’s heart began rapidly palpitating as he fell to his knees.  He screamed loudly, “Nooooooooooo!” Door Man responded, “Oh yeeeeeeeeeeessssssss!” followed by crazy cackling.  He then picked up Porter like a scrawny puppet and shoved him against the wall behind the door while violently slamming it into him repeatedly until the door was nothing but a pile of toothpicks. Porter lie dead behind the remains of the pulverized wooden door as the first confirmed victim of the supernatural Door Man serial killer!  We know this because of the classified hidden security cam footage discovered by the US Paranormal Defense Agency, and of course, our insider sources gave us the supernatural 411!

The Origin Of The Door Man 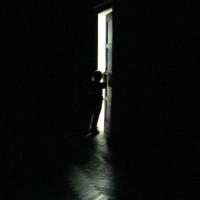 The Door Man is a supernatural serial killer with only one known shape-shifting ability. That of flattening his muscular-skeletal system just enough to hide behind doors.  Clearly, he could hide under beds, and other places but doors are his thing.  His story begins in the home of a violently abused child whose sadistic drunken Stepfather would hide behind doors, and leap out at his son before beating him as he creepily cackled.  The boys name was Carl Elkwood, and his ever-growing dark mind would find sick solace in the Slenderman urban legend.  Carl dreamed of becoming a shape-shifter so he could exact revenge on wrongdoers.  One fateful day 15-year-old Carl happened upon a small shop of paranormal antiquities.  Carl would return day after day hoping to acquire something belonging to Slenderman.  Finally, the Shopkeeper claimed to have a talisman that was formed from Slenderman’s spilled blood.  It’s a vile black substance that hardens like tar.  Apparently, a paranormal crime-fighting team known as Mystic Investigations had battled Slenderman leaving his blood behind.  A warlock had been watching from the shadows and proceeded to collect the blood to create the talisman with a bit of magic.  The warlock found it useless since all it did was give the user the ability to compress their skeletal muscular system to a limited degree. So he sold it to the supernatural shop for $2000!

A Misguided Youth Sees Slenderman As His Salvation

Carl became obsessed with getting the talisman that was now priced at $4000!  He was under pressure to come up with the money before someone else bought it.  One afternoon after coming home from school he saw his Stepfather at the kitchen table counting several large stacks of cash.  He yelled at Carl, “What the hell are you doing home this early you little bastard!?!”  Before he could answer the phone rang, and his Stepdad was talking about bringing the cash for some merchandise behind the bowling alley.  He put the money in a brown paper bag, and began to leave but not before aggressively shoving Carl against the refrigerator while smirking. Something finally snapped in Carl, and he picked up a large previously removed kitchen cabinet door and beat the hell out of his stepfather with it.  He grabbed the cash, quickly packed some things in his backpack, and raced out of the house.  He made a beeline for the paranormal antiquities shop and promptly bought the Slenderman talisman having $2000 bucks left over.

A Dark Supernatural Villian Is Born

Upon placing the dark dull circular Slender talisman around his neck it exponentially fostered the dark thoughts already swirling around his mind. He could also flatten his body by merely thinking about doing so. More precisely he pretended to be his hero Slenderman. Carl realized he could easily hide anywhere in order to catch victims by surprise. The paranormal tool was the perfect fit for his trademark need to hide behind doors and utilize them as weapons as well. In essence, emulating his abusive Stepfather and punishing innocents for his messed up childhood! He then set forth on a worldwide killing spree as he saw the weakest of humankind to be a virus that needed extermination! Thankfully, one positive property of Slenderman was deeply programmed into his mind. Never hurt children! Slenderman kidnaps kids and places them in a static dream state to siphon their metaphysical energy. To our knowledge, he has never physically harmed them. So Door Man does the same and only murders weak adults.

The terrifying talisman gave him the power to shapeshift just

enough to hide behind doors along with greatly increased strength.  It’s also thought that Slenderman communicates with Carl in his dreams, along with drawing him to people with great fear, and phobias. Carl was soon dubbed Door Man by paranormal investigators, and it seems he liked the name as well. He will often leave messages signed as such at government classified crime scenes.  A side effect of constantly wearing the dastardly device includes deep inset eye sockets with totally demonic black eyes that glow green when shape-shifting. He also lost his eyebrows and for reasons unknown paints on pointed ones with a black magic marker.  He writes notes on the doors of crime scenes with it, and also draws a mustache, and goatee on himself.  Clearly, he is suffering from a deep Slenderman psychosis yet the talisman prevents the eventual usual death from said paranormal psychosis. Simply put he is quite nuts and beyond dangerous!

The Door Man has now been on the loose instilling terror in the hearts of the weak-willed for several years now!  The government and supernatural crime fighters are actively seeking the whereabouts of this sick paranormal puppy! If you have any information that can lead to his capture then don’t hesitate to contact your nearest paranormal experts or Mystic Investigations! If you notice any of your doors out of place please run out of the house immediately and call the police. Even if it turns out nobody was in there you have no way of knowing if he was? Better to look stupid than be dead!

Next Urban Legend: The Blair Witch