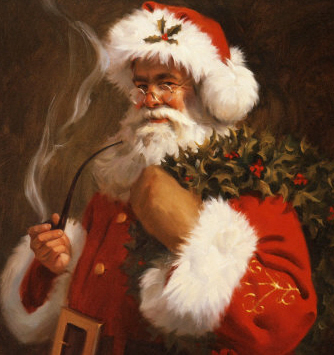 Technically he’s not white if one is talking about having classically Nordic features.  Santa Claus is Greek, and has an olive completion common among those of Mediterranean descent.  He actually lies somewhere in between white, and black.  All least that’s what his human half displays as he is half Angel as well.  He has emerald green eyes that glow a bright white when activating his various Angelic powers.  If you look closely you can actually see even brighter white specks flying about his eyes like that of a snow globe.  This is not seen among other Demi-Angels, and is most likely the Spirit Of Christmas flowing through him. He had black slightly curly hair as a youth but he actually willed himself to age so it grew gray then white.  He could have remained looking in his 20’s forever but he so sympathized with humanities geriatric plight that he wished to age with them.  Well to a certain point anyway.  Now he looks like a perpetually older gentleman with the classic white beard.  Although he isn’t overweight but rather extremely husky with well developed muscles to fit his large frame which is to be expected from any male with Heavenly lineage.  He’s approximately 6′ 4″ weighing in at about 260 pounds.  Even without special powers, and abilities he isn’t someone you’d want to mess with!  The whole image of Saint Nicholas being fat probably came from sightings of him in ancient times when he would pack gifts into his jacket which made him appear to have a beer belly.  He’s never objected to the jolly fat man image as it is apart of his legend, and the Spirit Of Christmas.

The whole impetus of this article was reading this article which appears to be another politically correct fueled race obsessed diatribe against the traditions of Christmas.  The author of the article wants the white Santa to become a black Penguin!  Santa could indeed turn himself into a penguin but why the hell would he?  However he loves penguins, and adopted some from the South Pole.  They waddle about the quaint cobblestone streets of North Pole Village with glee.   At Christmas time he actually does put little Santa hats on them.  It’s beyond adorable!

Maybe the author of the Black Santa Penguin article can’t grasp that fake Santa’s are generally white because the majority populace, at least in the US, is white in appearance for now.  This is reflected in his image being used in various venues, and his portrayal in films.  If the majority was black then most of the Santa’s would probably be black as well. Santa Claus loves people of all races, and he approves of fake Santa’s of all races who wish to spread the Spirit Of Christmas since Saint Nick himself can’t be in every mall in the world!  Although he does make it to some, and if it’s in a nation of mostly one race he has been known to change his appearance to that race so as not to stand out in a crowd. Clearly he would look out of place in China, or Africa.  If you’re kid has ever seemed totally enchanted, and beyond happy after visiting a mall Santa then odds are it was the real Santa Claus.

As we established the real Santa is neither black or white he has accidentally conformed to the politically correct which should make the divisive race obsessed happy.  Santa Claus wants to see the world come together as one people rather than constantly focusing on differences, and creating unnecessary multicultural racial divides where none need to exist.  We have the pleasure of speaking personally with Santa Claus, and he has no plans to create a new Christmas Penguin icon.  Just as he will not approve of calling Christmas the winter holidays or happy holidays for fear of offending someone.  Everyone is free to portray Santa Claus as they wish.  All he asks is that he at least appear human!  Merry Christmas!