How Gravity Should Have Ended Part 2

Posted on April 7, 2014 by Halloween Haunter 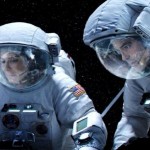 If you didn’t read the first post on how the movie Gravity should have ended then read it here otherwise this will make no sense what so ever! We theorized an alternate ending to the space disaster flick Gravity along with spawning a trilogy. In an alternate future after the Gravity Trilogy raked in a record 4 billion worldwide it will be decided another trilogy will take place 10 years later. When we last left Astronaut Ryan “Sandra Bullock” Stone she was reunited with her dead daughter Trudy, and was married to George “Matt Kowalski” Clooney on the futuristic paradise Earth in a parallel Universe. In Gravity Part 4 we unfortunately see Bullocks cycle of good, and bad luck hit another fog bank of dark luck. An invasion force of higher dimensional beings decides to take credit for the wondrous paradise Earth, and the intergalactic society of prosperous peace. They install themselves as Gods, and demand worship along with tribute in the form of child sacrifices. There seems to be no hope until Bullock, and Clooney happen upon a Holy Grail of sorts that speaks of a way to ascend to Godhood. It’s a race against the clock as the Gods are set to take their child’s life which the Gods feel should be an honor for all concerned. In the end Bullock, and Clooney ascend to Godhood along with their daughter. The movie ends with them hiding among the Gods in the higher dimension above.

Gravity Part 5 then opens with them acting as higher dimensional terrorists sabotaging the Gods on their home turf. This distracts them from their brutal rule of the physical reality below. They then discover that the God race is incapable of death, or re-programmed it from their energy matrix eons ago. Based upon an imprisoned God’s story of ancient teachings they begin to see a way to attain more power by ascending to the next dimension above by dying. Clooney decides to valiantly be the test subject when they finally figure out how to eradicate a God. He dematerializes his energy form with faith that his spirit will live on. He finds himself in the next dimension above, and contacts Bullock, and Trudy who then do the same. They then descend upon the now lower Gods dimension declaring themselves their Gods thereby giving them a taste of their own medicine. The trio single handedly imprisons all the Gods while releasing the imprisoned God who helped them. He acts as an eternal prison guard of sorts. The end of the film sees them ascending to the 3-D physical dimension of biological beings to inform humans how to ascend to an even greater paradise where one can dictate things with their mind, and live out their fantasies for all eternity.

Gravity Part 6, the supposed finale of the this sextilogy or hexalogy, finds the trio exploring 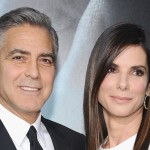 the massive expanse of parallel Universes, parallel multiverses(collections of parallel Universes), and parallel dimensions within the 7 dimensions they have ascended to. Along the way they exact justice against the wicked, and inform people on how to ascend to the luxurious dimensions above. A new threat looms in the form of the Omniverse God, aka space in which all the Universes, and Multiverses exist. He’s deeply angered, and dumbfounded by how a couple of silly humans parlayed an Earth orbital disaster into the greatest rise of power even seen in the Omniverse! He attempts to undo all their good work with his impressive author authority power. Naturally the holy trinity of Clooney, Bullock, and Trudy have come too far to let some petty Omniverse God destroy them, and all they’ve built. In a miraculous quest they join mental forces with many factions of higher dimension beings who work to eventually overwhelm, and possess the Omniverse Gods mind thereby becoming the Omniverse.

The holy trinity then escapes into Omniverse space to form their own Omniverse of perfection, and peace. However they realize they can’t relax as long as a higher power exists so they forge forth until they discover the one Macroverse God which turns out to be something like an infinite intelligent super computer with little to no emotion. An infinite consciousness working out mathematical probabilities, and playing out every scenario possible in a mindless manner. They realize everything that is wrong in the entire Macroverse is this jerks fault so they form a massive coalition of Omniverse Gods thanks to the charismatic Clooney, the charming Bullock, and the innocent beloved child Trudy. They attempt to duplicate the Omniverse Gods possession with the Macroverse God but it fails, and a massive war breaks out. The very first Macroverse War! Eventfully the holy trinity find a weakness in the Macroverse Gods defenses, and they infuse all their emotions into him opening him up to mental possession. They then become the Macroverse God, and reset everything that ever existed for all time past, present, and future making everything a perfect paradise of unimaginable joy for all eternity! The End!

Clearly this would be the greatest series of movies humankind has ever seen!  After a quarter of a century the six blockbusters earn an astounding record breaking global gross of one trillion dollars!  Many find the films to have deep meaning somewhat like the Matrix trilogy but on a more exponential level.  This leads to an explosion of people joining the Godhoodism religion that deals with the higher dimensional afterlife, and our ascension to Godhood after death.  30 years after the release of the original Gravity, Godhoodism becomes the number one religion on Earth claiming over half the planet as card carrying members.  Within 100 years the Gravity films have created such an amazing gravitation force of imagination that humankind ascends to Godhood to live out the Gravity dreams of sweet ever loving higher dimensional life for all eternity.  The End!  LOL!

We love all things Halloween! Whether it's glee of trick o treating, the iridescent allure of the autumn season, or the spooky mystique of supernatural beings. Enter the world of Halloween all year round on our All Hallows Blog.
View all posts by Halloween Haunter →
This entry was posted in Extraterrestials, Gods, Parallel Universes, Sci-Fi, Science Fiction Movies and tagged Astronauts, George Clooney, Gravity, Outer Space, Sandra Bullock. Bookmark the permalink.