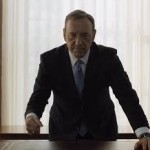 The above video is a cool preview of the upcoming video game release of Call Of Duty Advance Warfare.  Although we like to call it the future of President Frank Underwood.  President Underwood is the US President in the Netflix series House Of Cards, and is portrayed by actor Kevin Spacey.  Spacey also plays Jonathan Irons, the founder of the Atlas corporation which is the most powerful military business on Earth in 2054.  Since everything happens in some parallel Universe we think that things go wrong for President Frank Underwood in another reality.

Perhaps something Nixon like where he faces impeachment, and potential unprecedented serious treasonous criminal charges.  As all hope seems lost, and he contemplates suicide, Frank stumbles upon a top secret anti-aging government research project.  It makes him look decades younger, and allows him to create a new identity.  He fakes his death, disappears, and resurfaces later on as Jonathan Irons.  He eventually founds the Atlas corporation, and uses his insider US military knowledge to grow his business to the largest military corporation on Earth.  Eventually it becomes a powerful military force that is able to rival the United States, and other nations as well.

is set to be on sale November 4, 2014 for personal computers, Playstation, and Xbox.  Pre-Order Now.

Be whatever you want by channeling the ideals of your parallel Universe self through creative visualization.  You are everything over the great Multiverse expanse of infinite parallel Universes.

We love all things Halloween! Whether it's glee of trick o treating, the iridescent allure of the autumn season, or the spooky mystique of supernatural beings. Enter the world of Halloween all year round on our All Hallows Blog.
View all posts by Halloween Haunter →
This entry was posted in Parallel Universes, Video Games and tagged Call Of Duty Advanced Warfare, Frank Underwood, House Of Cards, Kevin Spacey. Bookmark the permalink.