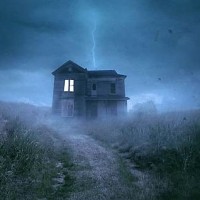 A Poltergeist is a malevolent metaphysical energy spirit or force with the ability to deeply affect physical environments including inflicting harm upon humans. The Pentalpha Poltergeist is a rare paranormal phenomenon in which five ghosts who died by the same horrific incident become bonded into a perplexing pact of violent vengeance!  Most of the time a magical element involving blood sacrifices, and Sanguine Pentagrams are required to create a sinister spirit so powerful that it repels even the most powerful of demons!  The Pentalpha itself creates a metaphysical Pentagram that wields extreme magical powers which manifest blatantly into our reality. Thus far there is no known way to free the human ghosts from their collective consciousness as a Pentalpha Poltergeist.  If you’ve entered a haunted house containing such a blasphemous beast then there’s no way you’re reading this because you would have died and been damned within the confines of the supernatural structure!

What Is The Most Powerful Poltergeist Of All Time? The most powerful poltergeist known in the secret supernatural record is the Lancaster Family Pentalpha Poltergeist. An entity actually born of a God-fearing family brutally slain by a cannibalistic serial killer in Dust Bowl-era Kansas.  A poltergeist still in existence to this day in their original house of indestructible horrors hidden behind top-secret government protocol in a zone known as Paranormal Area 842.  The birth of the Lancaster Pentalpha began on the nefarious night of April 8th,1938 when a lone serial killing drifter & magical practitioner named Flynn Mallory brazenly murdered Kenneth Lancaster in front of the four other members of his family who were helpless to exit into the suffocating Snuster, aka massive blizzard, and dust storm.  He proceeded to tie everyone up, and then monstrously ate Kenneth’s raw heart in front of the Lancaster Family. Their terrified eyes displaying the sheer shock of this surreal event!  Eventually, he dispatched with the rest of the family in the same manner for the purposes of completing a demonic blood ritual to attain unholy paranormal powers.  In the process, he inadvertently created the makers of his eternal Earthly Hell.  The Pentalpha Poltergeist!  Read The Complete Lancaster Family Horror…