Mystic Investigations very own Drake Alexander was blown up in an extraterrestrial vessel in 2011, and had amnesia while making his way around Kentucky. Unfortunately such a condition in a

vampire is merely caused by a massive brain injury, and all super immortals eventually heal regaining their memory via metaphysical means.  If they’re eating food instead of blood the healing process takes substantially longer. Rather than days their odd human like state could go on for many months. Of course any vampire telling them who they are or hypnotically mesmerizing them snaps the amnesia victim right out of it!  Regrettably, such hypnosis on a standard vampire for the opposite purpose doesn’t cause them to enter the same unique latent state.  They can be tricked into thinking they’re human until they come across sunlight or a human whose blood they will always immediately lust for!

a vampire virus cure.  The demonic virus itself is unique in that a ritual must take place between sire, and their potential vampire to activate the vampirism.  So some manner of magic is involved.  The only magic the average vampire can perform. Thankfully you can’t simply catch the vampire virus like the easily spread Zombie virus.  The amnesia factor, along with hypnosis, doesn’t work on other supernatural beings such as Werewolves with their Lycanthrope Virus.  They still turn into to hairy horrors in the full Moon even with memory loss.  In addition other demon based beings like Demi-Demons don’t change when they have memory loss. Perhaps there is a fine line between human and vampire that can be skirted under extreme situations?  Even a relationship with the Placebo Effect seen in humans.

There have been fabled ancient cures for vampirism for countless ages but none have panned out. Often complicated magical rituals involving extremely

hard to obtain substances that must be administered at some appointed time or during a key celestial event.  That being said there are rumors, and some evidence of certain types of paranormal blood reversing vampirism that either turn them into a human, or into another supernatural entity temporarily, or permanently.  The permanent solutions include Angel blood which is said to revert a good vampire to human form but will kill an evil one instantly!  Pure demon blood will eventually transform a vampire into a full demon.  Genie blood naturally turns them into a Genie that is instantly locked into the nearest bottle, or lamp. Earthly God or Goddess blood is rumored to either temporarily, or permanently turn them into a God!  Reverse Vampire, aka Sol Vampires, blood could possibly cause a full reversion to a human state.  Of course it’s beyond rare a vampire would run across any of these beings in biological form! 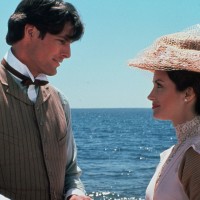 The 1980 motion picture “Somewhere In Time“ Starring Christopher Reeve, and Jane Seymour is a time travel romance in which Richard Collier (Played By Reeve) literally wills himself back in time to meet Elise McKenna (Played By Seymour).  The love story begins with Collier spotting a photo of McKenna from 1912 in a hotel museum. It’s love at first sight, and he eventually realizes she was the mysterious old woman who gave him a pocket watch eight years earlier.  She asked him to return to her before walking away never to be seen again.  Unfortunately she had died before he could speak to her.  In her belongings was a book about time travel written by a professor who he visits for advice.  Advice that leads him to attempt travel through time via self-hypnosis by tricking the human mind into thinking it’s in another time frame.  The Professor claims he briefly traveled to 1571 through sheer will.  Read The Rest Of The Story On Our Time Travel Blog…