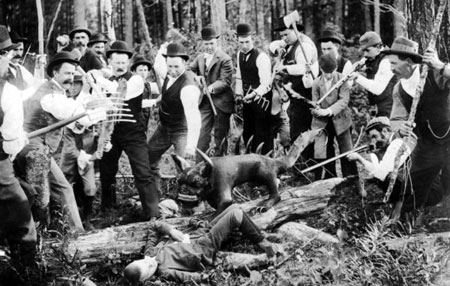 Heavily armed paranormal professionals, including vampire slayers, werewolf hunters, demon decimator’s, Cryptozoologists, and other supernatural specialists, hunted down a hellish hoard of wild cryptids that terrorized a small Arkansas town after they were let loose by the suicidal sorcerer, Sly Sanderson, who owned the private paranormal preserve that catered to the rich and famous. The only supernatural animals believed to still be at large after days of hunting are a lone werewolf, kept in non-human form by dark magics, and a demonic dingo, Pottersville police said today.

A feral vampire and a Chupacabra had been believed to be running free, but the sheriff’s department discovered both were killed last night by mobs wielding torches of holy fire, and squirt guns full of holy water.

Fauwker County Sheriff Abner Shatzy told paranormal reporters that he can’t be 100 percent sure that those animals are the only ones unaccounted for among the 44 animals, most of them ferocious and out for human blood, who were let out of their silver-lined cages Thursday evening.

Shatzy and Mystic Paranormal News cryptid expert Ashley Abercrombie, who will take the living hell beasts at the preserve to the Woodland Springs Colorado Paranormal Research Center, urged the public to remain cautious and alert of their surroundings during this deadly dangerous time.

The sheriff said that when his men arrived at the cryptid preserve in Pottersville, they found hell hounds, Chupacabras, Demonic Tigers, zombie bears, vampire cats, and a Manticore roaming the area. Since it was about to get dark, he feared the animals would escape into the night causing death, and destruction around Fauwker County.

He, and his men, on the advice of a Paranormal Consultant, began to open fire with silver bullets.  Due to the unique danger of the situation, private paranormal professionals have been allowed to wield weapons alongside law enforcement as they eradicated the ferocious supernatural animals.  If any odd-looking animals are spotted then the Fauwker County Sheriff requests your immediate call to his station so the appropriate action can be taken to protect the public.