What Happens To The Angels Who Die On Supernatural?

Posted on November 2, 2017 by Xavier Remington 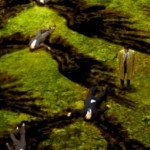 This post was originally published on October 30, 2013. Our speculation on what happens to dead Supernatural Angels is written about below. It turns out we were sort of right. There is a place where Angels go when they die. We finally saw this in Season 13 of 2017 when the Angel Castiel comes back to life. Apparently slain Angels go to a literal dark void of Nothingness that existed before anything else including God himself. When Anges and Demons die they go to The Empty to sleep for all eternity. If God brings one back he simply plucks one from there yet the Cosmic Entity who runs the place seems to indicate God has no power there? Apparently Castiel is the first Angel to wake-up there due to Lucifer’s Son Jack. That in turn wakes up the Cosmic Entity. The Entity reluctantly sends Castiel back to Earth because he can’t stand being awake, and dealing with anyone!

Our Original Supernatural Angel Afterlife Theory
On the sci-fi TV series “Supernatural” when Angels in biological form are killed by the Angel Blade we’re never told what happens to them. It’s inferred that the death is permanent as other Angels mourn for them.  Clearly they don’t return to Heaven, and there’s no evidence they go to Purgatory.  There’s no mention of them going anywhere after death like humans do since Angel technically don’t have souls.  They surely wouldn’t go to hell!  There’s some suggestion that their Angelic essence still exists since God resurrected the dead Angel Castiel.  Could there be some secret Angel afterlife that nobody but God knows about?  If so Castiel has never mentioned it. Perhaps memory of it is lost upon reanimation.

Our theory is that Angels were created directly from the mind, and body of God in that reality since they refer to him as their Father.  The very holy light of the “Supernatural” Universe.  When they die their essence or Angelic soul returns to the source, aka God’s mind, where they lie dormant in his sub-consciousness. Perhaps nothing more than a collection of memories for God to peruse. Plausibly dead Angels could be like multiple personalities that God can talk to in his mind. At any time God wishes he can bring an Angel or other deceased creature back to life. If he created everything then it can never truly be gone!

I'm the President of Mystic Investigations. A paranormal crime fighting organization out for supernatural justice in a world full of darkness.
View all posts by Xavier Remington →
This entry was posted in Angels, Sci-Fi, Science Fiction Television, Supernatural. Bookmark the permalink.