The Victorians Odd Obsession With Death

Posted on August 9, 2016 by Halloween Haunter 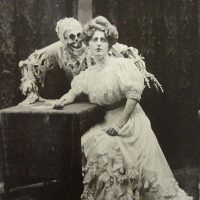 The Victorian era lasted from 1837 – 1901. It was known as the Second English Renaissance and the Beginning of Modern Times, but it is perhaps most famous for its bizarre preoccupation with death. As an example, Victoria, the reigning queen of that era, mourned the loss of her husband, Prince Albert, for forty years. She dressed in mourning attire for the rest of her life, and even had her servants lay out her dead husband’s clothes and set up his shaving gear every day. Read The Rest Of The Story At The Weird World Of C. L. Hernandez

"The Victorians Odd Obsession With Death", 5 out of 5 based on 1 ratings.

We love all things Halloween! Whether it's glee of trick o treating, the iridescent allure of the autumn season, or the spooky mystique of supernatural beings. Enter the world of Halloween all year round on our All Hallows Blog.
View all posts by Halloween Haunter →
This entry was posted in Halloween History and tagged Death, Victorian Era. Bookmark the permalink.