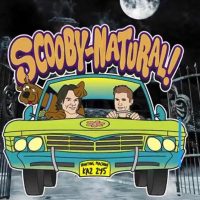 The television show Supernatural televised a special cartoon version of their show on March 29th, 2018 when they enter the world of Scooby-Doo. In the 16th episode of Season 13 titled “Scoobynatural” the Winchester Brothers are magically transmuted into the cartoon world by a ghost. Something not that far fetched since there are Cartoon Universes in existence. Often times bubble realities inadvertently created by the human collective consciousness and their mass belief or imagination thinking of various media forms. That being said I would think it was disturbing to suddenly be a bright inky eclectic colored animation. Although supposedly two dimensional they would still see things as three dimensional in the cartoon reality.

The video below sets forth a theory that the Winchesters introduced the real world of the supernatural into the Scooby-Doo Universe. This caused future cases they solved to be not only humans posing as paranormal creepers but also actual real entities of metaphysical mayhem. There’s also an explanation given as to why Scooby-Doo talks. Apparently he’s the descendant of aliens who possess animals. Technically extraterrestrials aren’t considered supernatural otherwise from their viewpoint humans would be as well. We all naturally evolved on our respective planets. The ability to possess a person or animal could be the result of advanced technology or genetic engineering to create such abilities.

"The Supernatural Scooby-Doo Crossover Cartoon", 5 out of 5 based on 1 ratings.
Share This Story

We love all things Halloween! Whether it's glee of trick o treating, the iridescent allure of the autumn season, or the spooky mystique of supernatural beings. Enter the world of Halloween all year round on our All Hallows Blog.
View all posts by Halloween Haunter →
This entry was posted in Halloween TV and tagged Scooby-Doo, Supernatural. Bookmark the permalink.
Copy Protected by Chetan's WP-Copyprotect.