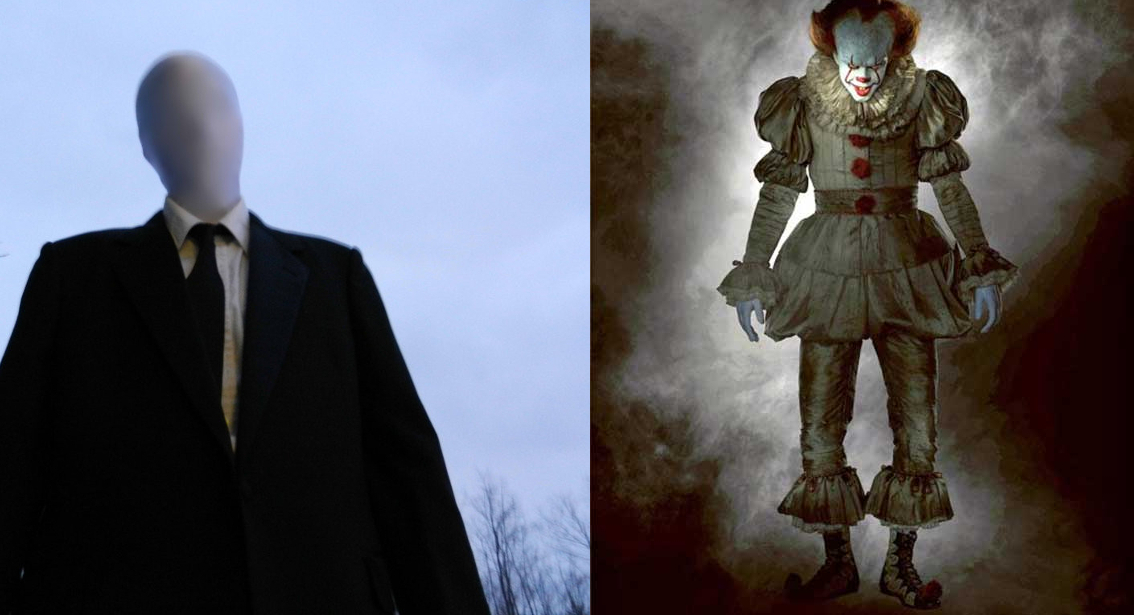 Both Slenderman and Pennywise have an obsessive fixation with children. Slenderman generally looks to lull kids into a calm submission before kidnapping them. He then stores them in an eternal stasis to draw upon their unique metaphysical energy as they slumber in a world of pleasant dreams. It is in Slenderman’s best interest to get the purest enchanted energy by not frightening the kids. On the other hand, Pennywise feeds off the fright he foments in innocent children with much maniacal merriment. Although stored for a time in his floating gallery of nightmares they are eventually eaten alive by this monstrous clown! It appears that Slenderman is far less malevolent when it comes to kids. However, he does love playing intricate mind games with adults who he directs to commit despicable acts by proxy. They acquire the Slender Sickness and eventually die! Pennywise seems to ignore adults unless they directly interfere in his plans. Usually, he places them under a spell of apathy so his misdeeds against kids go unnoticed. He gleams no joy nor power from tormenting them.🤡

Slenderman is an ancient shapeshifting entity from another dimension with various powers that include teleportation and telepathy. Pennywise, also known as IT, is a far more ancient entity born in the dark void of Macroversal Space. Possibly from the first embers of fear to ever exist. Despite this Pennywise is confined to this physical reality just as Slenderman is. The crazy IT clown has all the powers listed above including reality warping abilities. Also, his shapeshifting powers are far more prolific than Slenderman’s. Penny can become virtually anything while Slender can only alter the basic shape of his body. Most notably the creation of highly versatile tentacles that can become sharp as a knife! Naturally, both possess super strength, speed, agility, and senses. So who would be the victor if these two terrifying titans met in battle?

The Playground Of Children’s Nightmares

It’s 1963 and a group of kids frolics merrily on a New England playground while occasionally looking about cautiously. Pennywise bursts on to the scene to up the ante on the previous frightful mind games of the past week. The scared children scream as the Cringe worthy clown chases them about while shapeshifting into various horrifying beings. Slenderman suddenly teleports on to the scene and slaps Pennywise silly with his own shape shifting tentacles. Lil’ Penny goes flying into the jungle gym dazed for a bit as he energetically springs upright! He is surprised by this new entry into his game of fear. Slender’s faceless appearance starts to turn the tables as Pennywise feels just a slight twinge of fear. The kids scatter away into the woods as Slenderman sends Pennywise a telepathic message to back off as these are his chosen children now.🦑

The Weakness Of Unchecked Fear

The horrifying harlequin resents being told what to do on his own turf by an outsider! Some anger temporarily sends the fear flying into the ether. He tells Slenderman in no uncertain words that he will die on this playground. Slenderman then sends out a psychic shock wave of maniacal laughter that causes pain in the clown’s malicious mind. Slender then tangles Pennywise up in a tight knot of his tentacles as he attempts to give the clown the infamous Slender Sickness.  Penny is able to resist it and shape shifts into a bunch of red floating balloons that pop under Slenderman’s pressure. Pennywise escapes his grip and tries to ascertain Slenders fears. He appears fearless so Penny goes big and turns himself into the largest version of himself he can. A 20-foot tall dancing clown!

The Master Of Fear Is Left A Frightful Mess!

Pennywise pummels Slenderman down while screaming like a loon! He even takes a bite of him with his sharp teeth. He quickly spits it out due to its hellishly unsavory taste devoid of even one ounce of fear.  Unfortunately for the IT clown, no fright is created as Slender grows extremely angry even as his Midnight black blood oozes out of him! He stretches himself out to nearly the same height while winding around the super clown. He appears like a black rope wrapped around the clown’s body constricting it violently! Pennywise hits the ground and begins choking. Slender sends wave after wave of psychic attacks upon the fear-powered clown’s mind. Now drowning in great fear himself he is growing ever weaker. He returns to normal size as Slender begins stabbing him with his tentacles. Finally, Slenderman literally rips the clown to shreds. Slenderman strolls away with wounds healed. He sets his sights on the kids as a red clown nose rolls past him. In the end, Slenderman wins since he feeds off the metaphysical innocence of kids and seemingly fears nothing. Pennywise thrives on fear and is a coward at heart. However, he is amortal. He may appear dead for a long time but The Darkness that birthed him always brings this despicable supernatural serial killing clown back to life!🤡