How To Be The Zombie Or Mummy Cleopatra For Halloween

Posted on October 25, 2018 by Halloween Haunter

Cleopatra, the last active Pharaoh of Ancient Egypt, died over 2000 years ago on August 12, 30 BC at the age of 39. It’s believed she was mummified in the burial tradition of Ancient Egyptian royalty. However, her tomb remains a hidden mystery lost in the sands of time perhaps forever. Interestingly enough she was buried with her Roman husband Mark Antony who was also mummified. The video above is a Halloween makeup tutorial on how to appear as a hypothetical Zombie Cleopatra for Halloween or any costumed occasion. It would take a powerful dark Sorcerer to resurrect someone who has died several centuries ago. Especially if their remains were nothing but a skeleton or even worse some manner of dust. If that was the case it’s close to impossible but nothing is beyond the world of magic whether it be good or evil. Who can say what a practitioner of magic would do with a mindless Cleo Zombie. Perhaps they have a sick sense of humor, or maybe they had a bet with a fellow dark magician. Either way, in this case, the preservation of a mummy would make the task easier.

Although there is a catch. A properly done mummification process has paranormal elements

complete with a tomb that has an Egyptian curse on it. The infamous Mummy’s

Curse! Any attempt to resurrect Cleopatra, or disturb anything in her burial chamber, would have negative repercussions for the Sorcerer, Wizard, Warlock, or Witch in question. Once resurrected Cleopatra would technically be a Mummy and not a Zombie. A living dead Mummy is somewhat like a zombie once reanimated. However, they have some level of self-awareness and are linked to their soul unlike a mindless member of The Walking Dead that is just an automated soulless rotting cannibalistic corpse.

The Mummy Cleopatra would have the instinct to consume live human flesh in order to slowly but surely regain her full faculties, memories, and physical form. At some point, the day would come for the bandages to be torn away to once again gaze upon her timeless beauty in the mirror. Unfortunately, she would have to continue being a cannibal to maintain her feminine form and Mummy powers.  Seriously not a fitting end for her to be an eternal cannibal! 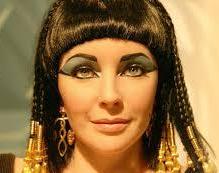 There have been rumors that Cleo ascended to Egyptian Goddess status. If that’s the case then her tomb would be empty, and there would be no mummy to rise from the depths of the hot Egyptian sands. All tomb contents of those who ascend to higher dimensional Godhood are whisked away to the afterlife with them. This could be why her tomb has eluded archaeologists thus far! Learn more about Cleopatra.

If you would like to be the hypothetical zombie Cleopatra who was never mummified then follow the instructions of the video above and click here for a quality Cleopatra costume to match. You could also opt to follow a standard Cleopatra make-up tutorial, and then get a mummy costume that compliments your Cleo costume.  A Cleopatra Make-up kit can help you greatly in the process. Happy Halloween!

Attempt To Channel Yourself In A Parallel Universe Where You Were Cleopatra, Or Someone Similar.

We love all things Halloween! Whether it's glee of trick o treating, the iridescent allure of the autumn season, or the spooky mystique of supernatural beings. Enter the world of Halloween all year round on our All Hallows Blog.
View all posts by Halloween Haunter →
This entry was posted in Halloween Costumes, Halloween Make-Up, Zombies and tagged Cleopatra Zombie, Egyptian, Mummies. Bookmark the permalink.