Posted on October 2, 2021 by Halloween Haunter

Martha Stewart partakes of her annual preparation of Halloween crafts, decor, and treats. Bewitching us with her classy charm spinning the spirit of the season into our homes. In supernatural circles Martha is known as one of the most famous witches on Earth! Naturally, she doesn’t display these magical skills as it would violate The Supernatural Secrecy Pact. She also didn’t build her empire on magic as there can be unforeseen repercussions if one uses witchcraft for personal monetary gain. Although, she has used it to hold off the aging process more than most. 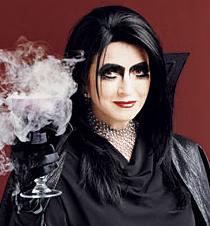 She is the life of the party in the secret supernatural community where she makes perplexing paranormal treats and decor for all holiday seasons. Martha has also been known to battle the forces of darkness with her powers. At her large rural estate she has had to deal with vampires, werewolves, and zombies! Interestingly enough, her time in jail was actually orchestrated by powerful members of the dark wizarding world that she defied. After the message was sent, via prison sentence, she put together a powerful coven to deal with future threats. She also toned down some of her more blatant magical activities. She is a welcome annual guest at Santa Claus’s North Pole City Christmas celebrations.🎃

We love all things Halloween! Whether it's glee of trick o treating, the iridescent allure of the autumn season, or the spooky mystique of supernatural beings. Enter the world of Halloween all year round on our All Hallows Blog.
View all posts by Halloween Haunter →
This entry was posted in Halloween Beverages, Halloween Food and tagged Martha Stewart. Bookmark the permalink.