Posted on September 7, 2013 by Halloween Haunter 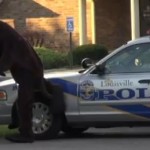 We have no idea what grounds the officer would have had to arrest a man in a dog suit pretending to pee on his precious cruiser. However he made the threat even before that over his loud speaker, and then gave chase with lights blasting. Most likely his ego was bruised, and he could not take a joke. Thankfully the big doggy man in question escaped as the silly cop was witnessed speeding around wasting taxpayer dollars with his lights flaring about. Just a word to law enforcement. We The People paid for those souped up units, and your salary so get over yourselves public servants! You’re here to serve, and protect us not be on a power trip acting as a Lord over us! Also get out, and run once in a while so you won’t get so angry at suspects your chasing when you’re so out of breath as witnessed on the various cop reality shows. If someone can out run you then you don’t deserve to wear a badge, and they earned the right to get away.

We love all things Halloween! Whether it's glee of trick o treating, the iridescent allure of the autumn season, or the spooky mystique of supernatural beings. Enter the world of Halloween all year round on our All Hallows Blog.
View all posts by Halloween Haunter →
This entry was posted in Halloween Pranks. Bookmark the permalink.