How Did The NBC TV Show Awake End?

Posted on November 26, 2016 by Xavier Remington 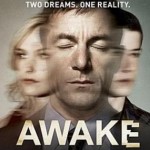 The NBC television series Awake, which aired in 2011-2012, was about a LAPD cop, named Detective Michael Britten (Played by Jason Isaacs), who was in a car accident with his family.  Afterward he began leading two lives that seemed perfectly real.  One where his wife was still alive while his son was killed in the automobile accident.  Another where his son was alive but his wife died in the accident. Upon falling asleep in one reality he would immediately awaken in the other.  He eventually unraveled a conspiracy revealing that the accident was in fact a deliberate attempt on his life.  This was wrapped up on the final episode.  However no real explanation was given for what he was experiencing throughout the show with his double lives.  It ended with one reality freezing while at his psychiatrist’s office, and him walking through a door in her office directly into his house where both his wife, and son were alive.  This made no sense on any level for the viewer, and the shows creator had no idea as well since they always leave shows open for a second season thereby screwing over the viewers.  Clearly there will be no second season so we shall devise an ending, and it will satisfy you so that you may move on with your own life.

Obviously he didn’t wake up from some messed up double dream, and it’s doubtful this was a parallel Universe drama since there were too many delusional visions mixed into both realities.  So it’s safe to say that neither reality was real.  So this is all in his head, or it’s the afterlife.  These type of realistic dreams could be the result of him in a coma, or in a mental institution in some highly disturbed state.  We think most likely he, and his entire family died in the car accident.  Everyone seemed to be wearing their seat belts, and it wouldn’t make any sense that one, or even two, died but one survived well enough to go back to work right away.  His family was run off the road, and the car rolled several times down a steep embankment.  It’s doubtful anyone could survive that even with seat belts fastened.

We believe that the show was following the ghost of Detective Britten who witnessed, for a split second, the rogue cop who ran him off the road.  That observation, which only registered at the sub-consciousness level, was enough to create his ghost from the sheer injustice along with the trauma of a violent death.  So the entire show took place in his mind as a ghost stuck in the astral plane between life, and death.  He clearly never manifested in the real world to uncovered the conspiracy against him, and to haunt those who caused his death.  As a 4-D ghost his mind would have been powerful enough to conjure up two realistic realities culling from every little observation of his life to create a complex world where he uncovered the mystery of the conspiracy that caused the tragic death of his family.  More than likely the ghosts of his family were real within his fantasy, and they thought they were still alive in the same way he thought he was still on Earth.  The rest of the people in his mind were created by his sub-consciousness but were of course based on the real people he had worked with.

It’s unlikely he could have unraveled the entire conspiracy from subtle sub-consciousness observations so he may in fact have been guided by Angels to the answer.  Such as his police partner dressed as a penguin.  In his mind he acquired the justice he needed to move on to the afterlife if in fact the real conspirators got away with their crime in real life.  The final scene with him, and his family was the final step of closure before entering the real afterlife.  In the end they would have all walked out the kitchen door into a bright white light leading them to Heaven, and beyond!

If none of this made any sense to you because you never saw the show then you can watch it online at Netflix.com with a low cost membership of $7.99 a month for unlimited streaming of a plethora of televisions shows, and movies.

I'm the President of Mystic Investigations. A paranormal crime fighting organization out for supernatural justice in a world full of darkness.
View all posts by Xavier Remington →
This entry was posted in Ghosts, Parallel Universes, Sci-Fi, Science Fiction Television. Bookmark the permalink.