Posted on September 16, 2020 by Halloween Haunter 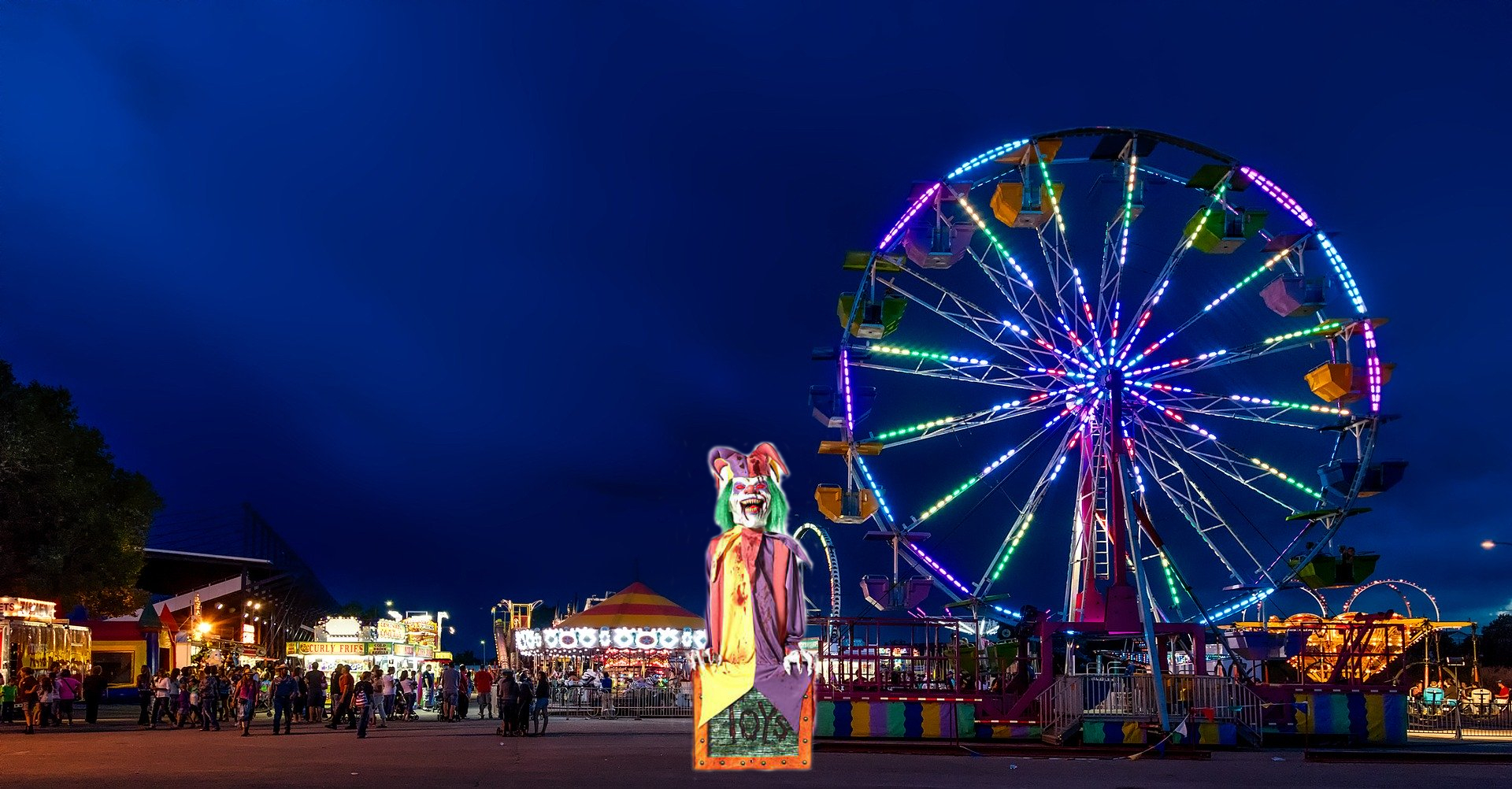 As the Witching Hour approaches the carnival finally winds down as the fair grounds grow silent. Only sparse pockets of people remain as you finish off the last of your cotton candy.  You smile as you think of the excitingly long day of rides, games, shows and tasty treats. While walking amid the quiet of the unusually warm breezy early autumn night. You notice a mysterious large black tent on the edge of the carnival grounds with golden sparkles it. It’s odd you never spotted it during the day as you roamed about the fair. Now the moonlight is making it apparent for some reason. The tent lies near the treeline of the dark woods.  It draws you closer with a mysterious magnetism. Earlier the fortune teller had told you,”Your destiny lies under the cloak of glittering darkness.” So naturally your curiosity gets the best of you!

You foolishly enter into the large dark canopy lit only by a small lantern hanging from the ceiling.  You see a large metal freight container marked,”DO NOT ENTER!” on it. Consumed by a sugar rush of excitement you grab the lantern and open the containers creaky metal doors. The container is tall enough to comfortably walk in. You observe several unmarked crates that don’t peak your interest. However in the very back is a small orange trimmed box with bloody red writing on it that simply says,”Toys”.  You can definitely feel that it’s the source of the mysterious magnetism that drew you here! As you open the lid a sulfuric stench ridden wind rips through the container causing the metal doors to slam shut thereby scaring the ever loving hell out of you!  Although that was nothing compared to the spine chilling clown jester who suddenly springs up in front of you like a jack in the box from the very bowels of hell itself! 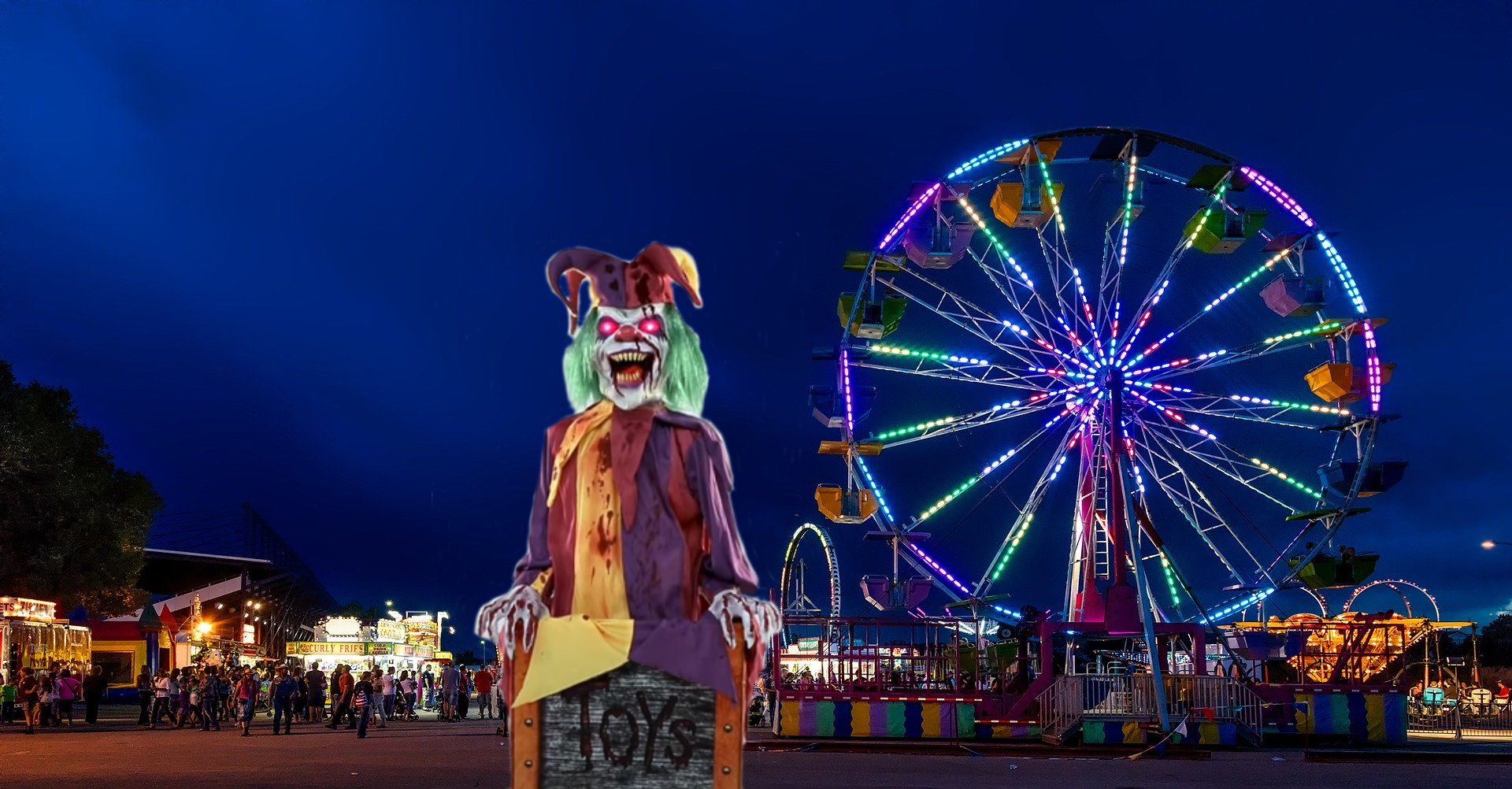 You fall back onto the floor in terror as the crazy clown screams shrilly and then cackles with maniacal joy!  The clown’s eyes glow red with inexplicable blood dripping down its face. Its pointy sharp teeth and claws snap at you in a menacing manner!  What you’ve stumbled upon is a demonically possessed paranormal object!  You arise, and back away slowly toward the door.  You feel somewhat secure in the knowledge that this diabolical jester is attached to its box despite it rattling about the metal floor.  You turn to open the freight container doors but the rust ridden thing is jammed! You accidentally drop the lantern, and it breaks leaving you in pitch black darkness!

The cackling, and rattling of the box instantly stops.  For only a matter of seconds you begin to think you imagined the whole thing in the silent darkness.  You keep fumbling with the door while throwing yourself against it. You efforts are futile as you stop to rest a bit. Then you hear that horrifying chortling of the clown right next to your ear causing your heart to stop beating for a second or two before palpitating wildly! You turn around to see the glowing crimson eyes inches from your face.  Your heart wrenching screams are only heard by one person sweeping up trash near the tent!  He displays a sinister smile while quietly chuckling to himself.  His warlock eyes glow green with glee for he has scored another demonic sacrifice to shore up his magical powers.  May God have mercy on your soul!  Happy Halloween!

You Can Also Check Here To See If Chester The Clown Jester Himself Is Available!

We love all things Halloween! Whether it's glee of trick o treating, the iridescent allure of the autumn season, or the spooky mystique of supernatural beings. Enter the world of Halloween all year round on our All Hallows Blog.
View all posts by Halloween Haunter →
This entry was posted in Animated Halloween Props, Halloween Animatronics, Halloween Shopping, Horror and tagged Carnivals, Clowns, Jesters. Bookmark the permalink.