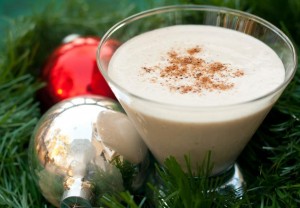 This North Pole Arctic Enchanted Eggnog is the most sweetest, scrumptious, and creamiest eggnog anyone could hope to have on this planet. It’s so addictive that you can’t stop drinking it. Thankfully nobody gets fat, or sick within the consecrated confines of North Pole City.  And no Santa Claus isn’t overweight nor horizontally challenged!  He’s got major Demi-Angel muscles! The best of this eggnog comes directly from Mrs.Holly Claus’s mystical kitchen but you can find variations on this recipe around Santa Claus’s North Pole City.

mixing procedures.  Not to mention the fact that the ingredients are paranormal, and there is a certain special Christmas magic that goes into the preparation of this delightful drink from Heaven. There are different varieties as well including Custard Nog (More of a vanilla taste, Chocolate Nog, Malted Nog, Strawberry Nog, Orange Dreamcicle Nog, Apple Cider Nog, Peppermint Nog, and Rudolph’s Nog (Uses a red extract from Rudolph The Red Nosed Reindeer’s nose that tastes like a cross between cherry, strawberry, and something wonderfully indescribable.  The coming from his nose thing might sound sick but everything at North Pole City is supernaturally sterile.)  All these varieties can also have various alcohol added to them such as Rum, Brandy, etc.

🎅As the Founder and President of Mystic Investigations I have dealt with all manner of metaphysical mayhem! However the supernatural beings and paranormal phenomenon of the Christmas season are some of the most magical. Our supernatural crime fighting team has had the honor of being welcome at the Demi-Angel Santa Claus's North Pole City and the horror of battling the diabolical Anti-Claus! This Xmas blog was born out of a deep interest and love for The Spirit Of Christmas! Merry Christmas To All And To All A Safe Night!🎄
View all posts by Xavier Remington →
This entry was posted in Christmas Beverages, Holly Claus and tagged Eggnog, Mrs. Claus. Bookmark the permalink.