Posted on October 18, 2019 by Halloween Haunter

What happens when a plague wipes out the entire male populace, and prevents any future male births?  Apparently an all female society somewhat Amish in nature.  The video above is a sci-fi anthology show called the Outer Limits. In their Season 4 Episode 17 “Lithia“, about such a future where women lead a primitive life amid a world of peace, and happiness despite the hardships of survival.  Then a military man comes out of a frozen cryogenic sleep to rile things up in a small community! If video above doesn’t work go to the link here. 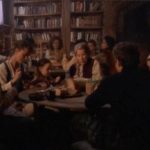 frozen men, apparently all from the military, are awakened around the world as an experiment to see if males could be assimilated into the feminine society of serenity.  Each instance fails, and the men are put back into the deep freeze along with their genetic material used to father females around the world.

Clearly military men aren’t going to be the best candidates to go along with a peaceful society ruled by women who have created a global system of cooperation free of conflict.  If only they had some of the many useful professionals, such as scientists, on ice, or the many millions of effeminate metrosexuals who walk the Earth at the present time.  There would have been plenty of men who would enjoy all the attention they’d receive in an all female world.  Men who wouldn’t want to rock the boat in a world that clearly was working far better than one run mostly by men.  Even in light of some inequalities that were thought of as sacrifices for the greater good of womankind.

If you liked this television show you might like the movie “The Last Man On Planet Earth” (Youtube) that features women ruling over a modern day Earth.  However this particular feminine world features a small band of aging men hiding out in a society of women who hate them with a passion.  They find hope in a genetically engineered man whose violent urges are supposedly non-existent. Will he survive all the man hating women to reintroduce males to society?

The fact is that it isn’t necessarily men that are the problem with society but rather the continued exploitation of the entire planet by an extremely small ruling elite class of royalty, billionaires, and their corporations.  Elites that have included women in power over the many centuries.  Clearly there are ruthless women who lust for power, and wealth the same as men do.  The solution to peace, prosperity, and happiness for the societies of Earth is to shed aside the archaic power structures, and election systems that allow the elite criminal class to bend the planet in their warped corrupt image.  Utopia will never be possible until humanity is united against this insidious force of evil that falsely poses as our caring saviors despite nothing ever changing for the better under their stale stewardship.

We love all things Halloween! Whether it's glee of trick o treating, the iridescent allure of the autumn season, or the spooky mystique of supernatural beings. Enter the world of Halloween all year round on our All Hallows Blog.
View all posts by Halloween Haunter →
This entry was posted in Apocalypse, Parallel Universes, Sci-Fi, Science Fiction Television and tagged Claire Rankin, David Keith, Females, Lithia, Outer Limits. Bookmark the permalink.