The Supervillain known as The Mardi Gras Joker is the current leader of the mainstream Carnival holiday known as Mardi Gras. Also called Fat Tuesday. His sinister stewardship is separate from the religious celebration of Shrove Tuesday. He often dresses in black, and white jester’s garb complete with make-up. However, he will dress normally to blend into non-costume party type of crowds. He taps into the metaphysical energies of chaotic debauchery resulting from excessive partying. The release of moral values seen in New Orleans, Rio de Janeiro, and other places around the world are the main fuel for his frightening flames of terror. However his central base of nefarious operations is in New Orleans, Louisiana.  Gaining leadership of a holiday requires a great deal of power, and magic to take over the Holidays Spirit. Generally, an unconscious spirit that manifests courtesy of the human collective consciousness. The most famous being The Spirit Of Christmas.

The Origin Of The Mardi Gras Joker

The Mardi Gras Joker’s real name is Frank Farcus but he’s long since abandoned that identity. Frank began as a low-level criminal who utilized theft to create wealth while enjoying the

torment of innocent people. There’s some evidence he had abusive parents and may have once had a speech impediment that caused him to be bullied as a child. At some point, he discovered Voodoo magic and found he had a deep interest in it. He realized he had a natural talent, and began training under a dark Voodoo Master. His powers grew, and so did his criminal enterprise that began to employ its own thugs. They often use Voodoo, especially Voodoo doll curses, to destroy people, and extort money from wealthy individuals. Eventually, the Joker took out his magical Master in a demonic ritual to greatly increase his paranormal powers.

The Party Apocalypse And Allies In Darkness

With his supernatural status increased he set his sights on metaphysically taking over Mardi Gras.

He has warped the Spirit of the holiday into a dark force that he channeled through his own deformed soul awaiting damnation in Hell. The Joker now works with other forces of darkness around the world to destroy humankind! The goal is to bring about a Party Apocalypse to shroud the world in eternal darkness amid violent partying. Plausibly like something seen in The Purge films except 24 hours a day every day for eternity! One of his most recent associates is the Plague Doctor who often employs new genetically engineered STD’s during Mardi Gras festivities. The Joker has also been rumored to have terrifying ties with an even more famous jester known as The April Anti-Fool. There are also recent associations with various Clown Cults.

Beware Of The Joker On Mardi Gras!

If you happen to be in New Orleans for Mardi Gras be on alert for the Joker, and his merry band of despicable denizens of darkness. They look to corrupt people’s morals and f

eed off that eclectic energy. They also love the fear that ensues from gaslighting and tormenting those in over their head at various celebrations. These filthy fiends have a nasty habit of kidnapping, torturing, and even sacrificing people on their altar of demonic damnation. That after stealing and extorting people for as much money as possible to keep their criminal enterprise afloat. There’s also a nasty habit of giving people false hope and telling them they can live if they complete intricate maniacal mazes of death. Those who are drunk as a skunk are easy targets in their weakened state!

The Mardi Gras Joker has created a dark cult of demonic Voodoo. Something very different from the Voodoo religion. These supernatural criminals are a malevolent motley crew you should avoid at all costs! If you spot The Mardi Gras Joker, and his cohorts, do not attempt to apprehend them. Immediately contact your nearest paranormal investigations crime fighting firm, or the US Paranormal Defense Agency. In addition, any joking about him being similar to the Joker from Batman is a really bad idea. He will fly into a violent rage if you even dare infer he’s a comical fool! Realistically he is far more of a threat than Gotham City’s Joker!🃏

Fun Fact: The Mardi Gras Joker has a Lair in the sewers of New Orleans. This guy really lives like a King among men!💩 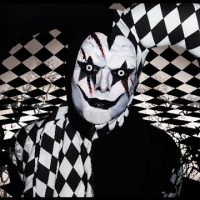 The self-proclaimed Voodoo powered leader of Mardi Gras known as The Mardi Gras Joker was up to his old nefarious tricks on February 13th, 2018! There are many tales of the despicable acts perpetuated by him and his thugs throughout the year. Particularly on Mardi Gras as he seeks to turn its debauchery into a completely dark holiday of horror! During 2018’s New Orleans festivities one such evil enterprise was interrupted by none other than the superhero born form the chemical laden ashes of September 11th, 2001. Of course we speak of the amazing Patriot Woman! Read The Rest Of This Sorted Story On Our Paranormal News Blog…