Curse Of The Haunted Calavera

Posted on October 6, 2019 by Halloween Haunter 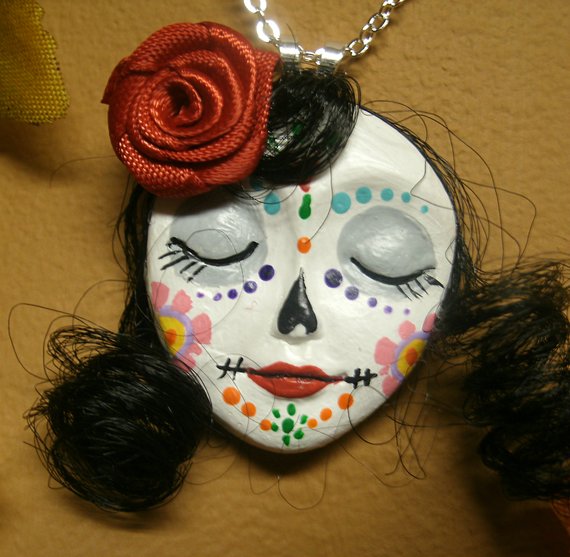 A Calavera, also called a Sugar Skull, is a decorative representation of a skull used in the Mexican celebration known as The Day Of The Dead. A time when the dead are honored as their spirits sometimes return to reassure family and friends that all is well. The calavera pictured above is similar to the one that was cursed by a dark witch in Mexico some decades ago. Her name was Montserrat and she wished to collect the power of human souls without having the risk of technically killing anyone! She knew how pesky ritualistic sacrifices could be a big mess both physically and legally.

Naturally, she sold her soul to the Devil through an insane repetition of potion ingestion and reciting sinister spells. You just don’t call up the Devil and offer up your soul. This gave her the supernatural juice to power her unique curse spell that she applied to a sugar skull she had fashioned by hand. Montserrat would target her ideal victims which were virginal girls who just came of age. Fortunately, kids aren’t easily taken by the forces of darkness due to their magical innocence that provides a protective power. Once she chose her victim she would find an excuse to get close and cut a lock of their hair off. That hair was then placed upon the calavera to aid in overcoming the power of their innocence that might block the magic.

At the 3:00 AM Devils Hour she would invade the young woman’s bedroom and startle them awake. Montserrat would hold the cursed calavera before them and the eyes would mystically open. When the target looked into the skulls eyes their soul would be sucked into it. The eyes are the windows of the soul and with the right spell that can be exploited! Once the soul was inside the sugar skull the eyes would grow wide in terror before closing. The girl lying on the bed would have her eyes permanently opened in horror for she was now an empty shell.

Montserrat would giggle with diabolical glee as she went a step further and coaxed the corpse into becoming a zombie. A deadly surprise for anyone else sleeping in the house! The zombie girl would plague the town for a time before being eradicated by zombie hunters. Everyone just assumed the girl was bitten by another zombie and nobody ever suspected Montserrat who created the false image of a helpful caring witch.

This continued for several years as the calavera held many souls granting the evil witch far greater power than she should have had! Enough power that she became full of herself and let her true evil nature show. Soon the good folks of the community figured out she was the one responsible for the zombies and the trapped souls. One fateful night an angry torch-wielding mob broke into her house as she slept. One of them grabbed the sugar skull sitting on the nightstand next to the witch’s bed.  They waved it in front of her demanding she release the souls just as she was shaken awake. Montserrat screamed as the eyes of the skull opened and her soul was sucked in! She was stuck in a vegetable state as her mind mingled with her victims in the calavera. They tormented her with a vengeance as she lived out her own personal hell!

Nobody could figure out how to release the souls so they could rest in heavenly peace. The calavera was inexplicably indestructible and couldn’t even be scratched! The mob eventually cremated Montserrat’s body hoping it would break the curse but nothing happened. To this day the cursed skull is haunted by lost desperate souls who have nothing to do but punish their capture! Its current whereabouts are unknown!

You can buy your very own hand painted sugar skull necklace by clicking here or the photo above! It makes a wonderfully spooky Halloween or Day Of The Dead gift! It could even be hung for some scary Halloween decor.🎃 One wonders if it could be the original haunted sugar skull?💀

You can buy all kinds of beautiful handcrafted items like the sugar skull girl at Cindy Lou Creates on Etsy!

"Curse Of The Haunted Calavera", 5 out of 5 based on 3 ratings.
Share This Story

We love all things Halloween! Whether it's glee of trick o treating, the iridescent allure of the autumn season, or the spooky mystique of supernatural beings. Enter the world of Halloween all year round on our All Hallows Blog.
View all posts by Halloween Haunter →
This entry was posted in Halloween Shopping, Short Stories and tagged Calavera, Day Of The Dead, Necklaces, Sugar Skull. Bookmark the permalink.
Copy Protected by Chetan's WP-Copyprotect.